Trading in the Asian and European sessions was rather choppy last night with most currencies trading in a tight range against the U.S. Dollar. And until 12:30 GMT, the day could be hardly characterized as explicitly risk-on or risk-off, with the European currencies leading the majors and the commodity currencies barely changed against the safe havens, the Japanese Yen and the U.S. Dollar.

However, risk-appetite came back with a vengeance this morning following the United States’ February inflation print, one that necessarily allows hopes of quantitative easing to creep back into the picture. With core inflation starting to show signs of slowing down, it is likely that the hopes of quantitative easing are priced back into the markets slowly over the coming days and weeks. The next major checkup on this debate comes at the end of March, when the Federal Reserve releases the minutes from their meeting this week.

Taking a look at credit, sovereign debt was shaken up following the consumer price index release as market participants shifted out of safer credit and into riskier debt. Case and point: the German 10-year Bund was the worst performing European bond today while the Portuguese was the strongest. Similarly, U.S. Treasuries continued to erode, with the 10-year Note yield rising back to 2.301 percent, at the time this report was written. In fact, with the yields backing the European currencies rising (German Bunds, Swiss bonds, and U.K. Gilts) more than their Japanese and U.S. counterparts, it’s not surprising that the European currencies outpaced the safe havens.

Overall, on the back of rising yields, the British Pound was the top performing major currency, up 0.85 percent, at the time this report was written, against the U.S. Dollar. Likewise, the EURUSD had gained 0.70 percent, while the USDCHF lost 0.72 percent. The commodity currencies were also stronger against the Greenback and the Yen, though the Canadian Dollar was up a mere 0.15 percent [UPDATE: the USDCAD was unchanged at 18:02 GMT]. 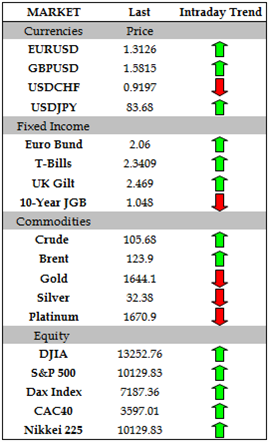 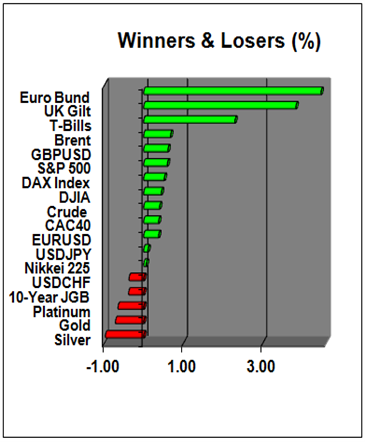 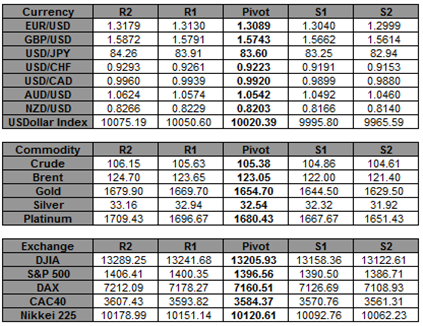