Price action in the overnight could hardly be characterized as risk-on or risk-off, though the trend from the past few days – U.S. Dollar sells off during early Asia before rebounding in Europe – was broken, as the U.S. Dollar peaked midway through Asian trading before higher yielding currencies and risk-correlated assets surged after London opened.

In terms of data in the overnight, two pieces stick out. First, out of Australia, consumers seem to be aware of the massive easing cycle more and more central banks are taking a part of, and as a result, they have hiked their inflation expectations. This should be supportive of higher rates in Australia, which have fallen off over the past few weeks. In turn, the Australian Dollar could find renewed luster through the end of the week, as it has today thus far.

Second, foreign direct investment in China took a nosedive in February, with the print showing a 0.9 percent contraction against a forecast of 14.6 percent expansion, according to a Bloomberg News survey. This adds evidence to the belief that China is headed for a “hard landing,” and that the People’s Bank of China will be forced to ease further. This too should be supportive of stronger commodity currencies.

Data Ahead of North American Session

Ahead of trading in New York, two pieces of data for the U.S. economy came across the wires that are supportive of a stronger U.S. Dollar. At 12:30 GMT, the February producer price index was released and it showed that wholesale prices in the U.S. climbed by the most in five-months. At 0.4 percent month-over-month, price pressures for producers were softer than the 0.5 percent projection, according to a Bloomberg News survey. Mainly, the price pressure was rooted in the recent uptick in energy costs, which the Federal Reserve has described as “temporary.”

Shortly thereafter, at 13:00 GMT, the January report for net foreign transactions was released, and that too was Dollar-bullish. Foreign demand for U.S. financial assets increased by $101.0 billion in January, up from $19.1 billion assets purchased in December. For now, with the U.S. economy continuing to make modest headway despite global headwinds out of Asia and Europe, U.S. equities are among the most appealing assets to own on the planet, relatively speaking of course. Should economic and financial conditions deteriorate further across the globe and the U.S. economy maintains its course, further increases of capital flows are likely in the coming months.

Overall, the New Zealand Dollar was the top performer, gaining 0.77 percent against the U.S. Dollar at the time this report was written. Following the Swiss National Bank’s decision to not raise the EURCHF floor from 1.2000, the Swiss Franc strengthened considerably, up 0.54 percent. The EURCHF fell 0.40 percent. In terms of the worst performers, the British Pound lagged all of the majors, which isn’t surprising considering Fitch Ratings downgraded the country’s credit outlook to negative. The United Kingdom retained its ‘AAA’ rating, however. Now that France has lost its ‘AAA’ rating, the United Kingdom is likely the next victim of the debt crisis to lose its ‘AAA’ rating in the coming months. 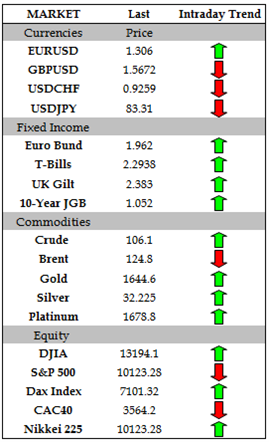 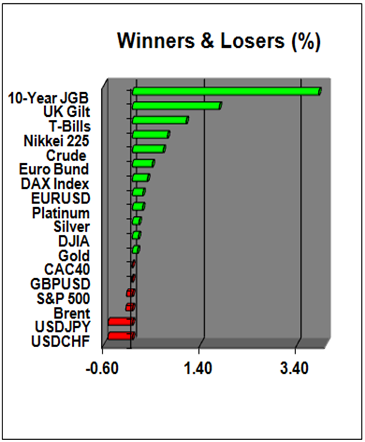 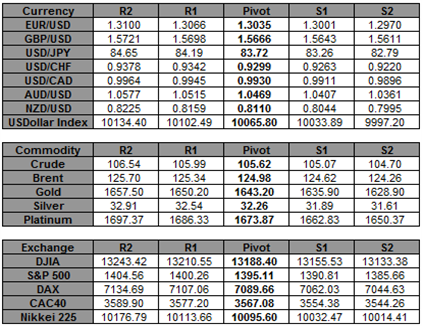