Higher yielding currencies and risk-correlated assets continue their descent from their 2012 highs set towards the end of February, with the Australian and New Zealand Dollars poised to trade lower for the fifth time out of seven sessions thus far in March. The main catalyst: data over the weekend revealed the largest Chinese trade deficit since 1989.

The Chinese data adds to an increasingly disparaging outlook, one which will likely see Chinese growth in the low 8 percent range by the end of the year. Still, any calls for a “hard landing” by China still may be overdone, considering that the People’s Bank of China still has considerable room to ease with the reserve requirement ratio at 20.50 percent. If the Asian growth outlook continues to deteriorate while the American outlook continues to strengthen, the Australian Dollar in particular will come under further pressure against the U.S. Dollar. China is Australia’s largest two-way trading partner; the Australian mining sector, the country’s largest sector, relies heavily on Chinese growth for revenue.

Taking a look at credit, following the country’s default, Greek bonds have traded slightly higher, though the lack of response is rather impressive as it’s evident that a default has been priced in for quite some time. Meanwhile, the Euro-zone periphery is back under pressure, with the Portuguese 10-year bond yield climbing to 13.117 percent on Monday. Similarly, Italian and Spanish bond yields deteriorated again, with the yields moving higher to 4.872 percent and 5.009 percent, respectively, at the time this report was written. The Italian 10-year bond has traded at a lower yield than its Spanish counterpart since March 2. The last time this occurred was August 19.

Overall, the Japanese Yen was the top performer in the overnight, up 0.37 percent versus the U.S. Dollar while posting over 1 percent gains versus the Australian and New Zealand Dollars. This move was expected, however, given the strength of the commodity currencies relative to the Yen over the first two-plus months of 2012 (the NZDJPY is still up 10.82 percent this year). As trading in New York approached, the Euro and subsequently the Swiss Franc were hovering around unchanged against the world’s reserve currency, while the British Pound and Canadian Dollar pared 0.24 percent each against the U.S. Dollar. 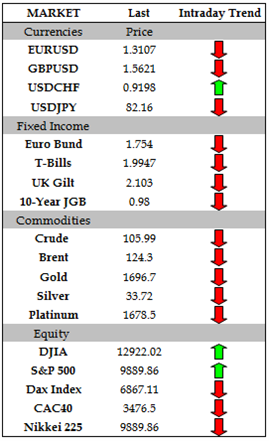 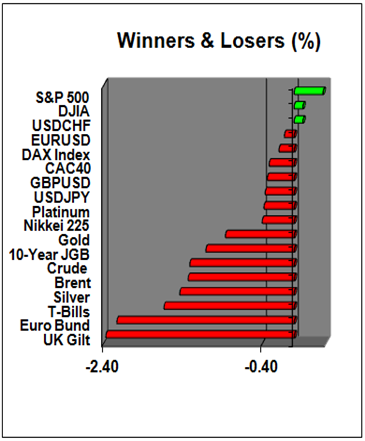 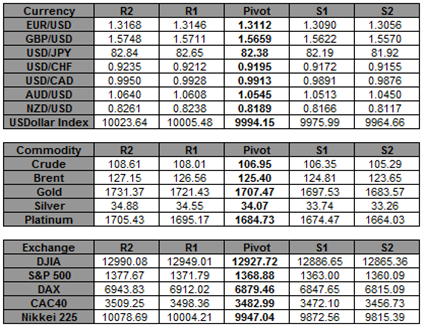