Higher yielding currencies and risk-correlated assets continued their move lower in the Asian and European sessions as it is becoming more evident that market participants are seeking haven in the U.S. Dollar. The Reserve Bank of Australia’s rate decision last night proved to be the major catalyst for the risk-off trade, with the central bank indicating that it still has room to ease its policy further if conditions necessitate such a move. This comes on the heels of a Chinese growth outlook downgrade to start the week, which hits the Australian Dollar the hardest given the interconnection between the Australian and Chinese economies.

As expected, the Euro remains hobbled by the European Central Bank’s long-term refinancing operation last Wednesday, which saw an additional €529.5 billion of liquidity pumped into the system. Data today showed that the ECB’s balance sheet has now topped €3 trillion. At current spot price, the ECB’s balance sheet is now $1 trillion bigger than the Federal Reserve’s, which sits at $2.928 trillion. This divergence will weigh heavily on the EURUSD going forward, as well as other Euro-based pairs. Any rallies by the Euro against the commodity currencies should be sold, in my opinion, barring significant tail-risk such as a disorderly Greek default (which remains a possible outcome).

Taking a look at credit, the Euro-zone periphery is back under pressure, with the most damage done in the Italian and Spanish 10-year bonds. Their yields have risen to 5.036 percent and 5.106 percent, respectively. Accompanying this, the German 10-year Bund has strengthened to its all-time low yield of 1.759 percent, although it traded at 1.781 percent at the time this report was written.

Overall, the Japanese Yen has been the top performer on the day, retracing some of its recent losses against the U.S. Dollar, while simultaneously posting a massive rally against the commodity currencies. The Australian and New Zealand Dollars, as expected, were the worst performers. In fact, since market close on Friday, the AUDJPY is up 2.83 percent. Even after such a move, the AUDJPY is still up 8.03 percent this year. Elsewhere, as mentioned earlier, the EURUSD continues to be weighed down by the ECB’s LTRO, falling another 0.74 percent at the time this report was written. Since the LTRO last Wednesday, the EURUSD has depreciated by 2.49 percent. 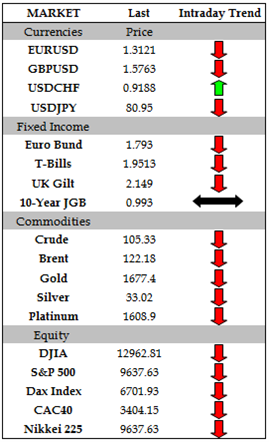 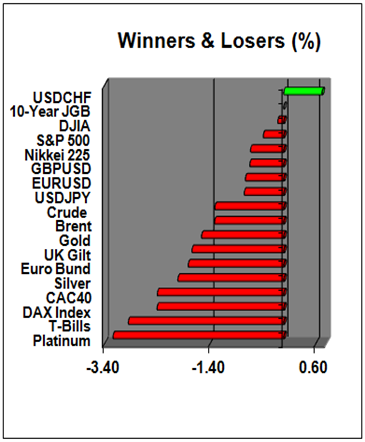 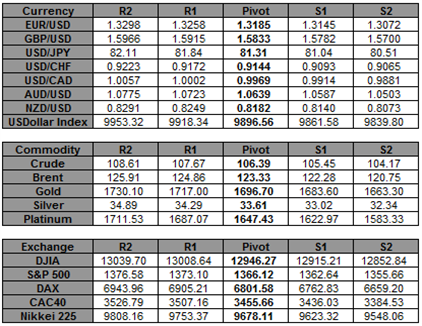