Euro-zone leaders, again, declared that this is a “turning point” in the crisis. Leaders are now stressing growth over austerity, even though austerity measures will continue across the continent. I remain highly skeptical that Euro-zone leaders will be able to concoct a scheme that satiates both the camp of cutting spending and the camp of spurring growth. Given this, the European Central Bank has been forced to step into the market as the lender of first resort – yes, first – after adding over €1 trillion over the past three-months.

Taking a look at credit, pressure is back on the periphery nations, with only the Portuguese and Spanish 10-year bonds pacing the losses on the day. Respectively, the bonds are now trading at a 13.028 percent yield and a 4.871 percent yield. Interestingly enough, French bonds are also under pressure, with the 10-year yield climbing to 2.783 percent. The best performers have been the Greek, EFSF, and German bonds; still, the Greek 10-year remains above the 30 percent threshold.

Overall, the U.S. Dollar has been the top performer on the day. The Canadian Dollar, seemingly playing catch up to the rest of the commodity complex, has slipped by a mere 0.12 percent. Meanwhile, the USDJPY has traded at its highest level in nine months, breaking its 2012 high, and confirming that the moves lower at the end of February was merely a correction. On the flipside, the Euro and the Swiss Franc continued their general weakness following the ECB’s LTRO. With the Swiss National Bank meeting on March 15, the Swiss Franc could weaken substantially as traders try and position themselves for a potential floor hike in EURCHF from 1.2000. 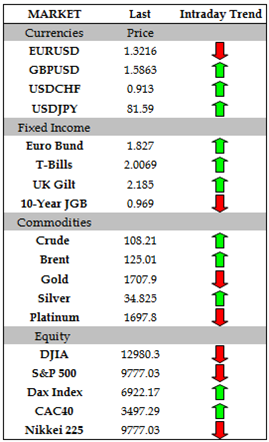 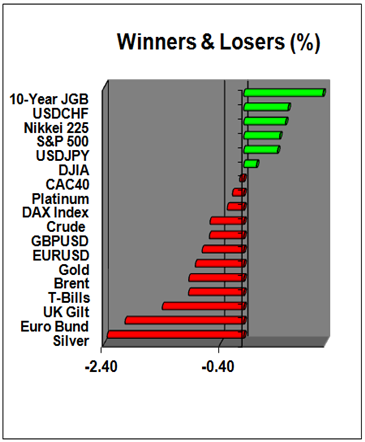 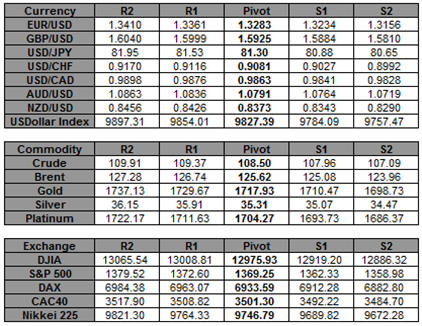