Trading in the overnight session clearly manifested the markets’ hesitation over the situation in Europe. While the Japanese Yen and the U.S. Dollar were the top performers – a typical occurrence when risk-aversion is the trading theme du jour – the commodity currencies were not the worst performers; that title goes to the European currencies.

The Japanese Yen’s move was explosively higher today, but in the larger context, the move is little more than a correction in my opinion. Through Friday, the Yen had declined by 6.07 percent against the U.S. Dollar, in February alone. However, after today’s price action thus far, the Yen’s decline had been pared to 4.95 percent against the U.S. Dollar. This appears to be little more than profit taking, and unless 78.174 is broken in USDJPY – the 61.8 Fibonacci retracement off the February move higher – the trend remains to the upside.

Taking a look at credit markets, market participants were heading for safety, with the German 10-year Bund strengthened to a 1.814 percent yield. Likewise, the U.S. 10-year Treasury Note saw its yield fall to 1.917 percent. With the German parliament readying to vote on the Greek bailout package, it’s of little surprise that the Greek 10-year bond weakened substantially, back to a 30.331 percent yield. The Portuguese 10-year is worsening as well, with the 10-year yield above 12 percent at 12.116 percent. Portugal is quickly becoming the next “best” candidate for a Euro-zone bailout.

As noted earlier, the Japanese Yen was the best performing currency on the day, up 1.25 percent against the U.S. Dollar. The biggest Yen move came against the Euro, with the EURJPY depreciating by 1.81 percent to start the week. Overall, the worst performers were the Euro and the Swiss Franc, down 0.58 percent and 0.52 percent, respectively, against the Greenback. Interestingly enough, and perhaps a sign that the dilutive monetary policy measures of Western central banks has boosted demand for commodity-linked assets, the commodity currencies were barely lower against the U.S. Dollar. Looking ahead to the European Central Bank’s long-term refinancing operation, there is a fundamental catalyst in place to spur a major rally by higher yielding currencies this week, in particular against the Euro. 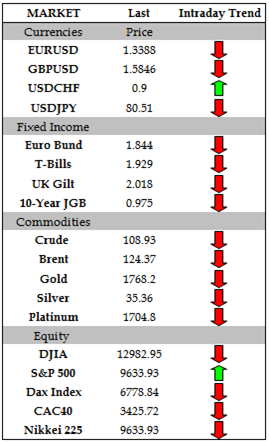 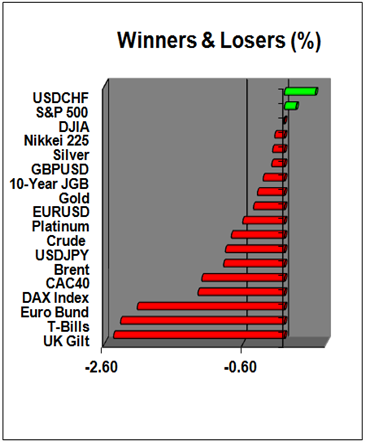 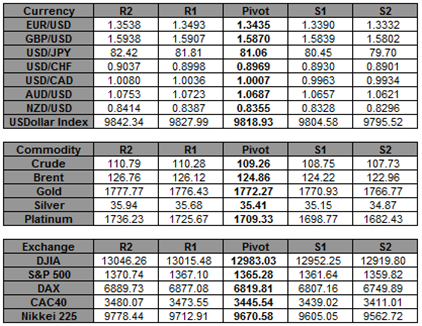