- Finance Ministers Look to Sign off on Greek Deal – WSJ

Higher yielding currencies and risk-correlated assets took a major turn higher in the Asian and European sessions, with the U.S. Dollar posting its worst performance against the Euro in over a week. The safe havens – the Japanese Yen and the U.S. Dollar – were hit from two angles: optimism over the Greek deal; and the People’s Bank of China decision to cut the reserve requirement ratio.

In regards to the latter, the PBOC is now showing its cards, and they don’t suggest a bullish growth outlook for one of the world’s most important economies. Even as price pressures took a turn higher in January, coming in at 4.5 percent year-over-year above the 4.1 percent expectation, collapsing domestic demand and a struggling housing market have reignited concerns over a hard landing. Should this be the case, which looks increasingly likely, another credit bubble could be forming in China.

In regards to Greece, it is of no surprise that the initial commentary from the Brussels summit has been hopeful. There are some impediments to a deal emerging, however, with Dutch Finance Minister Jan Cornelius de Jager saying that there needs to be a permanent Troike presence in Athens in order to ensure that the reforms promised by the interim Greek government are actually enacted (recent data has showed that the austerity reforms are posing a greater burden on the economy than previous anticipated).

Taking a look at credit, Euro-zone periphery sovereign debt is capitulating to the rally by higher yielding currencies and risk-correlated assets, with the Greek 10-year bond tightening by 29-basis points against its German counterpart. Similarly, the Italian and Spanish 10-year bonds gained 9- and 10-basis points, respectively. What was interesting, and should be monitored, is the relative underperformance of Portuguese yields (only down to 11.327 percent on the 10-year) and the weakening of Irish bonds.

Overall, the U.S. Dollar was the worst performing currency in the overnight, but given the swath of optimism to emerge over the weekend, such an occurrence was not entirely unexpected. What was expected and did pan out was the relative weakness of the Japanese Yen, which continues to face downside pressure following the country’s weak growth reading in the fourth quarter and the subsequent decision by the Bank of Japan to inject an additional ¥10 trillion ($128 billion) into the economy.

In terms of the top performers, the New Zealand Dollar led the majors, while the Swiss Franc was a close second. The Franc’s performance comes as little surprise, however, given the strength of the Euro. Since September 6, when the Swiss National Bank pegged the EURCHF at a minimum 1.2000 rate, the EURUSD and USDCHF have held a significant -0.93 correlation (Euro strength = Franc strength). 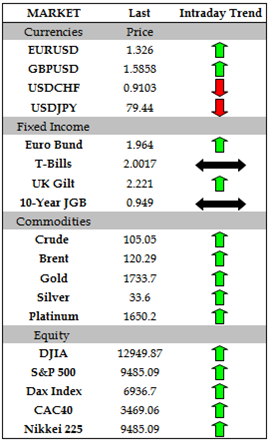 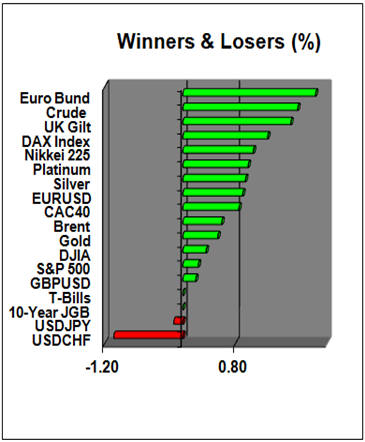 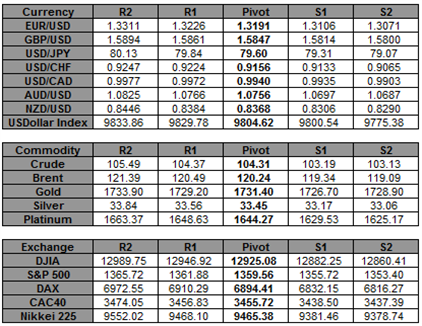