- Further Hurdles Ahead for Greece – WSJ

- Volcker to Push Back on Banks’ Trading – WSJ

Higher yielding currencies and risk-correlated assets took a turn back higher in the overnight as the uncertainties surrounding the Greek bailout and default were made clear, if only temporarily. After 199 Greek parliamentarian voted in support of the measures, support for the Euro came in against the lower yielding currencies, while the reduced prospect of a disorderly default quelled fears of a liquidity drain, sending investors back into higher beta currencies such as the Australian and New Zealand Dollars.

Now that the measures are passed – even as Athens burns – the ball is back in the European Union’s court, with the Euro-zone finance ministers scheduled to vote on the second Greek bailout on Wednesday. The Euro-zone finance ministers are still awaiting €325 million in additional budget cuts and written commitments from the Greek government before they sign off on the next round of funds, expected to total €130 billion.

Taking a look at credit markets, the move into riskier assets appears well-supported in the core and the periphery, with German bunds weakening on the day while most PIIGS debt strengthened, sending their yields lower. Of note, the Italian and Spanish 10-year bonds gained 12- and 11-basis points, respectively, while the Portuguese 10-year bond yield fell to 11.030 percent. As recent as January 31 the Portuguese 10-year bond was trading above 18.000 percent.

But for the performance of Greek bonds, which one would have expected to have improved on the recent developments, Monday had the makings of a classic risk-on day in the currency markets: higher yielding currencies outperform while lower yielding currencies underperform, with the European currencies trading somewhere in between. It is worth noting that the New Zealand Dollar, not the Australian Dollar, was the best performer on the day. I believe this is a sign of lower rates being priced into the Australian Dollar over the coming months, despite what the Reserve Bank of Australia signaled last Monday when they surprised the market by keeping their key benchmark interest rate on hold (markets were expecting a rate cut). 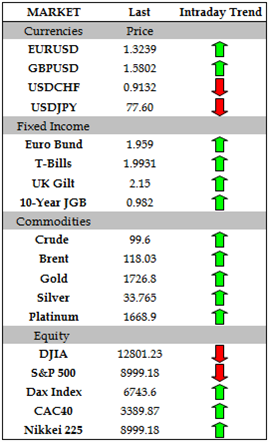 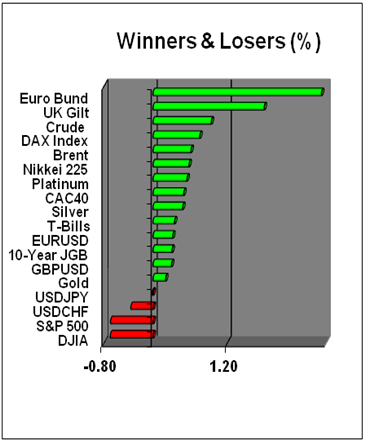 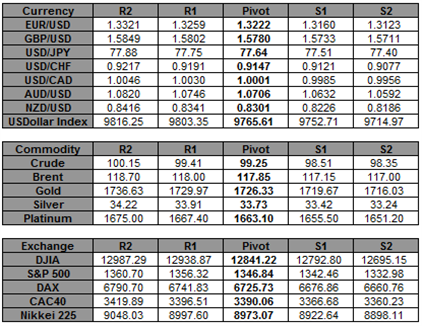