- Banks Not Off Hook with $25B Mortgage Agreement – Bloomberg

- Romney Matches Obama in Stance on Outside Groups – WSJ

Higher yielding currencies and risk-correlated assets took a plunge in the overnight, as data out of Asia and political developments in the Euro-zone weighed on investor sentiment. Chinese trade data was the first catalyst in the overnight, with trade flows significantly deteriorating on the import side. This reinforces the notion that the Chinese economy will struggle in the coming months without substantial domestic demand; and with inflation picking back up as per recently released figures, the People’s Bank of China may not be able to help the economy.

In Greece, riots have turned worse, as expected, given the increasingly hostile demands the European Troika has levied upon the Greek government and her citizens. With political infighting now occurring in the ruling coalition, European finance ministers have thus far held back the bailout package necessary for Greece to receive in order to prevent a default on March 20, when their next bond redemption is due. George Karatzaferis, the leader of Greece’s Laos part, said he couldn’t support the measures; this has awoken the bears, which have dragged equity markets down to their worst day in 2012 thus far. The negotiations remain in the balance, however, with the Greek parliament due to vote on Sunday.

Taking a look at credit markets, the developments out of Greece have weighed heavily on periphery bonds, with the Italian and Spanish 10-year notes pared back their recent gains, with the yields slightly rising back to 5.550 percent and 5.238 percent, respectively. Greek bonds were hammered, as expected, and German bunds strengthened as the flight to safety took root. It is worth nothing that the European Central Bank was active in the secondary markets soaking up Portuguese bonds: the 10-year bond yield fell by 91-basis points to 11.509 percent.

Overall, Friday has had the makings of a classic risk-off day, with the lower yielding currencies outperforming the higher yielding currencies. The Japanese Yen was the top performer, gaining 0.06 percent against the U.S. Dollar; the Australian Dollar was the worst performer, losing 0.95 percent. It is worth noting that the Swiss Franc has outpaced the Euro thus far, and the EUR/CHF has fallen back below 1.2100, at the time this report was written. I do caution that this move lower, for now, appears to be corrective in nature, and that if the Greek government agrees to and passes the Troika’s proposed measures, there is tremendous potential for a snap back rally, either today or for a gap open on Sunday. 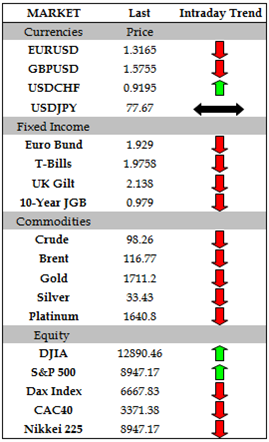 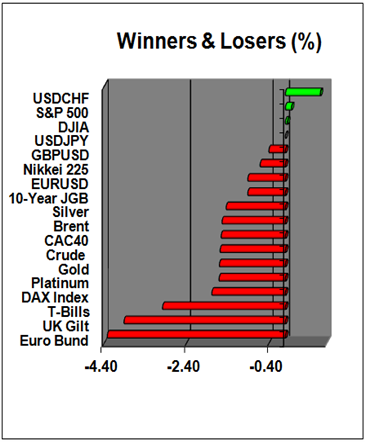 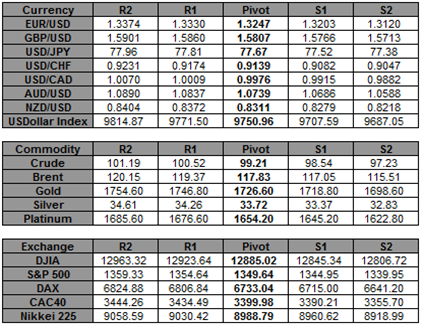