Higher yielding currencies and risk-correlated assets continued their slow grind higher, with the Japanese Yen’s performance having the hallmark performance of a risk-off day. Typically, when the AUD/JPY is one of the strongest performers – it was at the time this report was written – it means equities are likely to outperform (AUD/JPY and S&P 500 have a +0.84 correlation since the start of the 4Q’11), and the U.S. Dollar is likely to decline. Such has been the case, and with the DailyFX Volatility Index testing levels unseen since mid-2011 (and then before the 2008 market crash), it is possible that the U.S. Dollar continues its decline in the near-term.

The big two fundamental news this morning come out of Europe, with the Greek debt-swap negotiation and the European Central Bank policy meeting sharing the spotlight. In regards to the latter, Greek politicians agreed to the terms laid out by the European Troika yesterday, as outlined in the linked market alert. The Euro found some support on the news, briefly rallying above 1.3300 before pulling back ahead of the ECB rate decision.

In terms of the rate decision, nothing material or new was presented by EBC President Mario Draghi. He reiterated his outlook that the Euro-zone faces “downside risks,” and that the inflation outlook remains “broadly balanced.” To this end, he did state that that business and economic surveys have shown some “tentative” signs of stabilization in the region. Draghi also confirmed that Greek politicians had reached an agreement with the European Troika, though he would not comment on whether or not the ECB would take losses on its debt holdings; in fact, he called the speculation “unfounded.” Beyond these statements, the ECB’s Governing Council maintained its position that any non-standard measures remain “temporary by nature,” though once again, no comment was made on what time frame this translates into.

Taking a look at credit markets, the Euro-zone’s periphery countries saw, save Ireland, saw their 10-year bonds tighten relative to their German counterpart, a strong indication that markets are retaining their risk-appetite. However, without ECB intervention in the secondary market and the ECB’s long-term refinancing operation, I would be very doubtful that the yields in Italy and Spain would have been constrained within acceptable levels. Confidence remains key, and with a slew of important events in the next two weeks coming up, including the Greek parliamentary vote on the austerity measures, a German vote on whether or not to expand its bailout funding for the Euro-zone, and another LTRO, a disappointment across any one of these events could shift the risk landscape dramatically.

Overall, flight away from safety was the theme of the early morning, with the Japanese Yen and the U.S. Dollar headlining the losers on the day, though this comes as little surprise given recent trends across asset classes. After the ECB rate decision, risk was “on” if but temporarily, as market participants digested the swath of news across the wires today. What was interesting was the performance of the Canadian Dollar, which when considering nothing substantial was on the docket for Canada, I can’t help but point towards the recent wave of tensions in Iran and how it relates to crude. Should tensions between the United States and Israel, and Iran boil over in the coming weeks, I would expect the Canadian Dollar to benefit the most among the commodity currencies. 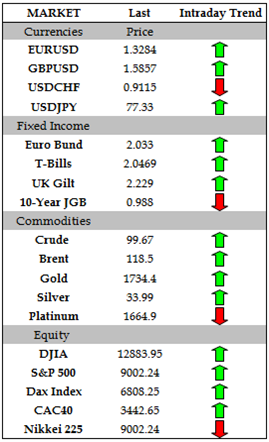 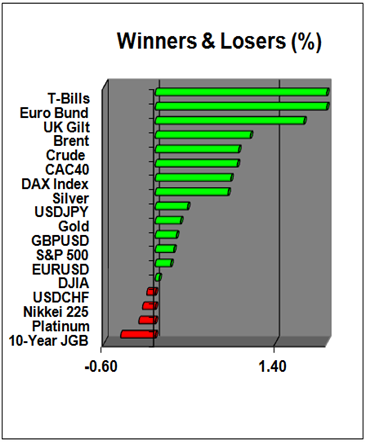 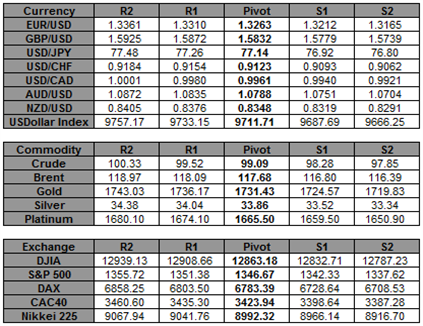