Euro Worst Performer as Greece Tip Toes Around Another Deadline

• Time is Running Out for Greece as Leaders Haggle – Bloomberg

Higher yielding currencies and risk-correlated assets pared back some of their gains from Friday, as expected given the technical overextension of current market conditions. In fact, looking at the commodity currencies’ recent performance against the U.S. Dollar, the Australian, Canadian, and New Zealand Dollars are due for a pullback, before an attempt at another strong move higher.

The fundamental backdrop that developed over the weekend supported the pullback too, in favor of U.S. Dollar strength. As Greek leaders refuse to implement further austerity measures forced upon them by the European Troika, questions are being raised as to whether or not Greece will receive further aid payments in time to ward off a default in March. For now, European leaders are threatening to withhold further disbursements unless Greece caves to their demands.

To this end, I want to take a moment to revisit a note I wrote on October 20, as it pertains to Greece threatening to default. In this event, French and German banks would be hurt, regardless of the liquidity provisions put in place by the European Central Bank to prevent a “Lehman Moment,” one that I am confident is sidelined for the time being. It is also worth nothing how European leaders have handled this crisis moment in the past: on October 20, I pointed out that the European Troika had determined that Greece’s reformers were insufficient, yet they still warranted the bailout; I also cautioned that this would lead to “sovereign moral hazard in the future.”

This appears to be the game of chicken we’re entertaining now: if Greece gets their way, Germany loses; if Germany gets their way, Greece loses. Greece already appears to be caving from their position already, but at the end of the day, it doesn’t matter if Greece implements additional measures or not; European leaders have already exhibited their willingness to throw money at this failing investment with little hesitation. This ‘dance’ appears to be nothing more than political pandering. The problem in the future now, as I stated back on October 20, is what will happen when Italy, Spain, and Portugal ask for help – they will once they see what is happening to Greece (this is the sovereign moral hazard). Those countries may be too big to fail, but that’s a bailout that Europe simply can’t afford.

Overall, safety was the theme in the first half of the trading day on Monday, with the Japanese Yen and U.S. Dollar posting the top performances among the majors. The Euro-zone’s concerns weighed heavily on the Euro, leading it to a 0.78 percent decline versus the Greenback, at the time this report was written. As expected, given the correlation between the EUR/USD and USD/CHF (at -0.91), the Swiss Franc was the second worst performer on the day. The commodity currencies rounded out the losers, with the Australian Dollar the worst performer among the higher yielders. 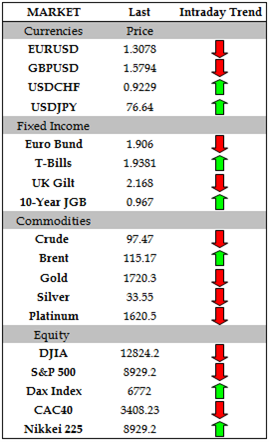 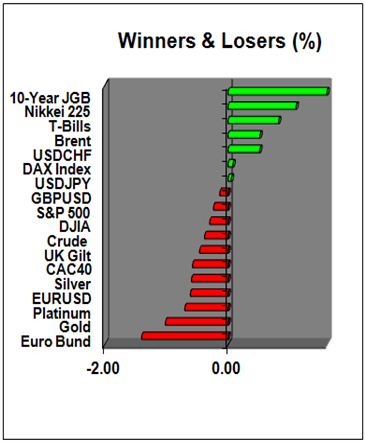 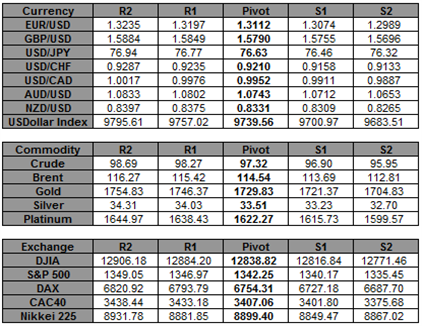