• With Tax Break, Corporate Rate is Lowest in Decades – WSJ

Higher yielding currencies and risk-correlated assets were softer across the board headed into Friday’s North American trading, as market participants eagerly awaited the hallowed nonfarm payrolls report. The U.S. labor market report did not disappoint; in fact, the print was exceptional relative to expectations. The unemployment rate fell to 8.3 percent in January from 8.5 percent in December, while the U.S. economy added 243K jobs overall.

Taking a deeper look at the report, private payrolls were the catalyst for better than expected figure, having added 257K in January against an expectation of 160K. Also, with manufacturing payrolls adding 50K, it appears the U.S. economy may finally be getting on firmer footing. Even though the participation rate fell, a sign that more Americans are giving up on looking for work, the Federal Reserve has placed little relevance on this figure, and is often ignored, at least publicly, when the Fed chooses its mandate. As such, the data today should provide a strong fundamental reason for the Fed to steer away from a third round of quantitative easing.

Moving on to sovereign credit markets, the risk rally was confirmed across the board, with U.S. Treasuries falling back on the day, though the 10-year Note held under the psychologically significant 2.000 percent yield, trading at 1.935 percent at the time this report was written. European bonds were worse across the board, in part due to the strong US data, in part to the complete breakdown in Greek debt-swap negotiations. As of now, the only information we have is that Greek Prime Minister Lucas Papademos is considering resigning. This would be a major step backwards, and would bring the prospect of a Greek default closer to reality.

Overall, the commodity currency complex was stronger against the U.S. Dollar, with the Canadian Dollar posting the strongest performance on the day, up 0.31 percent at the time this report was written. The European currencies and the Japanese Yen were notably weaker, as the prospect of further easing by the Fed has been greatly reduced. Still, with the European central banks preparing for immense cash injections, they stand to be among the worst performers this year. I fully expect the U.S. Dollar to stage a comeback in the coming days, with the AUD/USD and EUR/USD failing to break above key resistance, while the Dow Jones FXCM Dollar index held the 9700.00 floor. 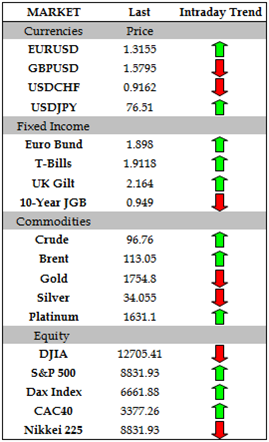 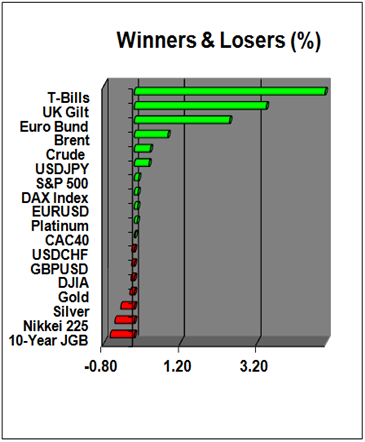 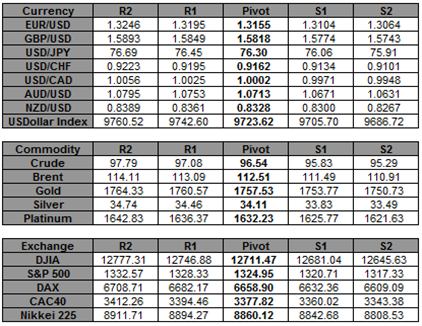