• Consumer Spending in U.S. Stalls as Americans Save – Bloomberg

• Germany Wants Greece to Give Up Budget Control – Reuters

Risk-off has been the dominate trend throughout the trading day on Monday, with no reversal coming at the start of European trading earlier in the day. Over the past few weeks, it has been typical to see markets bottom ahead of the European open and close near their highs at the end of the day in New York; this would be a surprising development on a day like today.

“Safety” has been the theme across the board, not just in the currency markets, where the Japanese Yen and U.S. Dollar are the top performers; the Australian and New Zealand Dollars are the worst. In premarket trade, the U.S. 10-year Treasury note has anchored itself below the psychologically significant 2.00 percent yield, trading at 1.827 percent at the time this report was written. The same stress was evident in European bonds, where the core countries, including France, have seen their yields widen against the periphery bonds of the same duration. In fact, it is worth noting that the Portuguese 10-year bond yield has soared to 15.525 percent, while the Italian 10-year bond crawled back above the significant 6.00 percent yield, to 6.083 at the time this report was written.

Moving over to the commodity complex, with energy, base metals, and precious metals all lower on the day, it’s evident that the combination of a stronger U.S. Dollar coupled with concerns over Europe and global growth are putting a strain on speculative capital flows. Accrediting the decline mainly to the former, fears over Portugal becoming the next ‘Greece’ as well as Germany demanding control of Greek finances have fueled the rally to lower yielding and safer assets.

Overall, the Japanese Yen topped the majors on Monday, just 0.17 percent stronger against the U.S. Dollar. The Australian Dollar was the worst performer, down 1.02 percent against the Greenback, while the Euro was off by 0.95 percent. The shakeout is an indication of a classic risk-off day: the higher yielding currencies lead the declines, while the lower yielding currencies are relatively stronger; ipso facto, the British Pound (0.50 percent yield) and the Canadian Dollar (1.00 percent yield) are the strongest performers after the Japanese Yen and the U.S. Dollar. 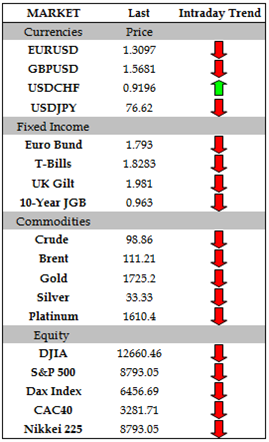 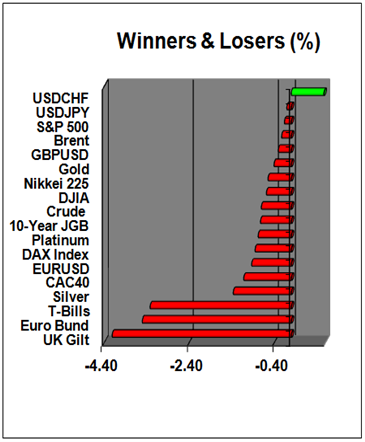 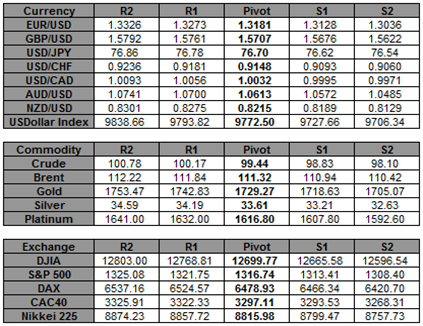