Although trading in the early part of the Asian session yielded little volatility and price action mostly to the downside across higher beta currencies, such as the Australian and New Zealand Dollars, once again, it was the European session that warrants a discussion. Higher yielding currencies and risk-correlated assets exploded higher shortly before 11:00 GMT, as news leaked that the Institute for International Finance (IIF) and Greek officials moved closer towards a debt swap deal. While nothing was official at the time this report was written, European Union Economic and Monetary Affairs Commissioner Ollie Rehn said the Greek negotiations should conclude “shortly.”

Taking a look across other asset classes, the move higher in risk appears to be confirmed across the board, not just in currencies and equities. All of the PIIGS’ (Portugal, Italy, Ireland, Greece, and Spain) 10-year bonds had strengthened on the day (higher price, lower yield), while the core countries saw their debt erode slightly. Ahead of trading in North America, U.S. Treasuries showed weakness on the long-end of the curve, with the 10-year Note holding firmly above the psychologically significant 2.00 percent yield.

It is worth noting that the current rally has some credence in my eyes, given how funding rates have eased substantially over the past few weeks. As noted in this report numerous times over the past few months, the Euribor-LOIS 3-month rate, the rate at which Euro-zone banks lend to one another on an unsecured basis, has fallen substantially, to its lowest level since the late-October Euro-zone summit. Clearly, this is an indication that the European Central Bank’s December long-term refinancing operation (LTRO) has provided the necessary support to keep liquidity flowing in the Europe. We will continue to monitor this rate as another spike higher would suggest strains are starting to reemerge, and the ECB’s LTRO provided a slight pause in the crisis, nothing more.

Overall, the big development, in my opinion, is that the Euro traded back above the key psychological 1.3000 level against the U.S. Dollar, as the world reserve currency’s dismal performance to start the New Year continued. In hand with the Euro’s strength was strength by the Swiss Franc, which given the EUR/CHF currency floor at 1.2000, has moved in near-lockstep with the Euro. In fact, since September 6, the day the EUR/CHF floor was implemented by the Swiss National Bank, the EUR/USD and USD/CHF have a significant -0.903 correlation. As the SNB is forced to intervene further in the future, I would expect this correlation to tighten: when the EUR/USD strengthens, the USD/CHF will weaken; and vice-versa. 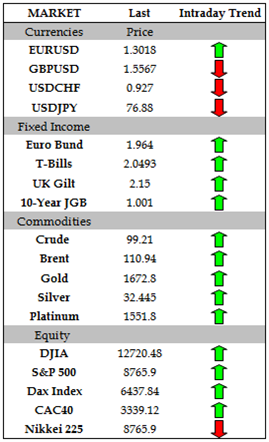 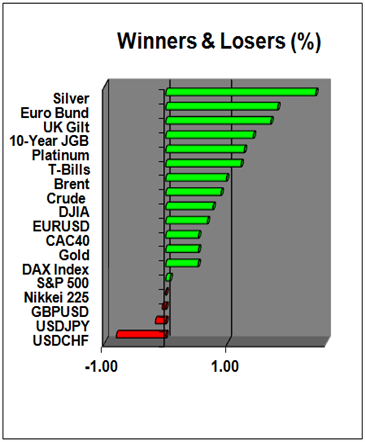 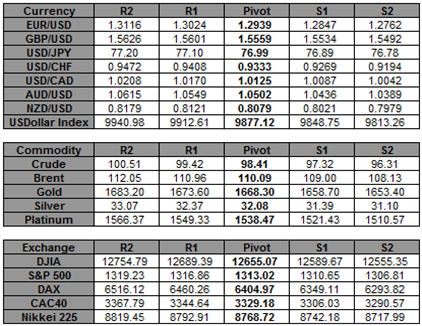