After gapping open higher for the second consecutive week, markets were once again in risk-averse mode throughout the Asian trading session. Like the trend that has been established the past week, as London session liquidity flooded the market, risk-appetite took a turn higher, boosting the commodity currencies headed into North American trading. None of the data from the past few days was supportive of this; in fact, a slowdown in China necessitating the first rate cut in three years by the People’s Bank of China may be the silver lining to recent figures.

As markets enter perhaps the most important week of the entire year, it is clear that market participants are nervous. Headline trading is back, and exceptional volatility in the coming days is expected to follow. With five rate decisions on tap, as well as numerous growth figures due from the world’s most advanced economies, the joint press conference scheduled for this morning by French President Nicolas Sarkozy and German Chancellor Angela Merkel was to offer a glimpse as to what to expect in terms of direction in the coming days.

As North American trading opened, Sarkozy noted that a Franco-German accord was “very complete,” with his rhetoric indicating that the core Euro-zone was indeed seeking a new treaty to ensure the survival of the common market. He also noted that the treaty changes, such as automatic sanctions on deficits over 3 percent, would be limited to the 17 nations that use the Euro. On the other side of the podium, Merkel noted that the permanent bailout facility employed in the Euro-zone would mirror that methods used by the International Monetary Fund. She did say that the functionality and reach of the European Financial Stability Facility were unknown at present time, however. Overall, the most important news were that Eurobonds and a more involved European Central Bank were ruled out; it appears Germany has gotten its way.

In what was a seemingly confusing bit of commentary – accord had been reached but the methods that market participants believe would solve the crisis are not being put forth – risk-appetite continued to push higher, with the Australian Dollar continuing to lead the majors. The U.S. Dollar was the worst performing currency on the day, down approximately 0.5 percent across the board, as the commodity currencies pushed back towards their monthly highs. With the RBA rate decision on tap for Tuesday, the Aussie is expected to consolidate, barring more unscheduled event risk that would drive sporadic price action. 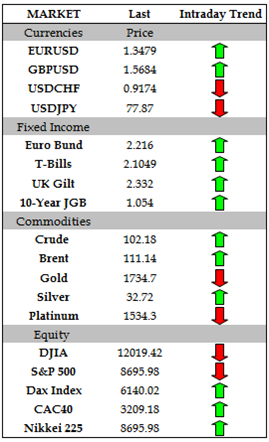 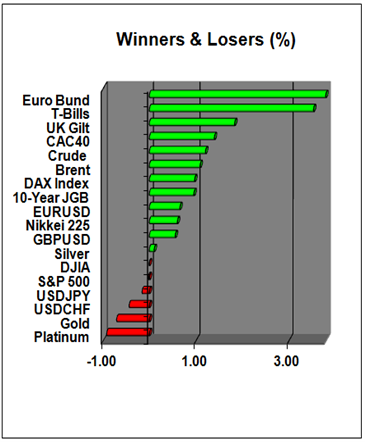 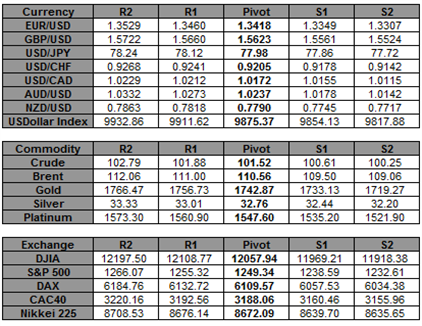