Market participants’ appetite for risk which had been established and carried on speculation the past three-weeks appeared to be dwindling on Tuesday, with Asian and European equity markets falling ahead of trading in New York. Three-weeks ago, to the day, a report issued by the Financial Times suggested that Euro-zone leaders would be convening to work more diligently on resolving the debt crisis plaguing the Euro-zone’s periphery nations. With the deadline for a resolution coming tomorrow, market participation rates have been exceptionally low, as investors wait on the sidelines to figure out where to park their capital following the Euro-zone’s leaders’ decisions.

Ahead of the last trading session on Tuesday, in which the currency markets were quickly shifting capital into lower yielding and safer assets, such as the Japanese Yen and the U.S. Dollar, the Bank of Canada decided to maintain their key interest rate at 1.00 percent. While the continuation of loose monetary policy was the expected, there were some noticeable changes in the central banks’ policy. First, the Bank of Canada removed the wording about the need to withdraw stimulus from their policy statement. This is considerable given the fact it is of their belief a liquidity crisis may be brewing and thus its necessary to leave extra slack in the system, just in case. Similarly, the Bank of Canada cut its growth forecasts for Canada lower, while simultaneously noting the chances of a recession in the Euro-zone.

The shift away from their cautiously hawkish stance has been reflected accurately in the price of the USD/CAD which has surged nearly 130-pips from when the rate decision was announced at13:00 GMT. The Canadian Dollar had been bid higher on expectations that the Bank of Canada might raises rates to temper inflation and support its currency, but concerns over global growth have altered that policy path. With excess liquidity expected to remain in the system, it’s likely that the USD/CAD will find bids higher in the coming days as traders unwind their long-CAD positions.

The first bout of news in regards the Euro-zone summit set to conclude tomorrow appeared to worry markets. Just after the start of trading, the United Kingdom announced that Euro-zone finance ministers had cancelled their meeting for tomorrow, and that there were no new plans for them to convene. Within a matter of minutes of the press release, the U.S. Dollar was surging across the board, most notably against the Australian Dollar and the Euro. The EUR/USD fell 60-pips in under 10-mins, and was down nearly 100-pips over the past 45-minutes.

Although the drop has been since retraced nearly halfway, the price action exhibited is a clear indicator of a trend that’s been in place for the past month: trading on fear. This so called ‘headline’ trading occurs when market participants ignore macroeconomic and microeconomic data alike, from growth and inflation figures to companies’ earnings. Markets have been pulled back and forth on developments out of the Euro-zone, and while this trend shows no sign of abating, what is clear is that it will have a definitive direction after tomorrow. 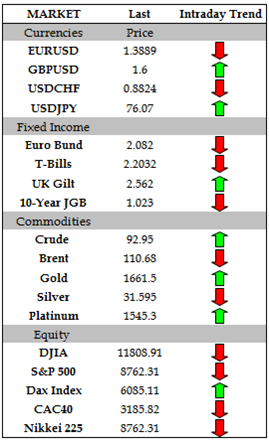 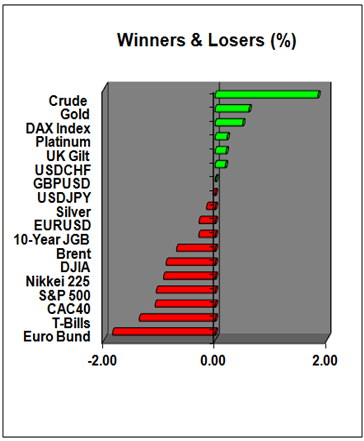 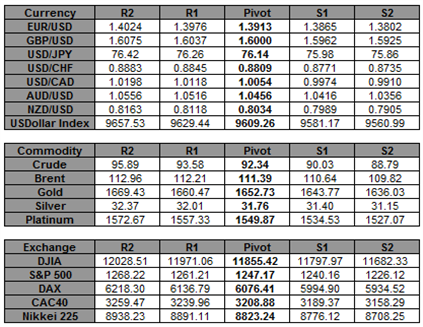