The past few days of trading have been incredibly choppy. As noted in the weekly column outlining the week’s most important events, market participants are ‘headline’ trading – that is to say markets are moving based on fear, news, and rumors. Developments late in the trading day on Tuesday best exemplified this notion: on a report from The Guardian, markets rallied to fresh daily highs, erasing Monday’s losses; with 5-minutes left before the 16:00 GMT close, the report was refuted, sending risk-correlated assets tumbling until the Asian session on Wednesday began.

Even though the initial report was found to be false (it was refuted by Dow Jones), markets ignored the fact that it was purely a rumor, and instead of paring back gains, they maintained them – and then some. Headed into the North American session, the commodity currencies, the British Pound and the Euro were the best performing currencies while the Japanese Yen, the Swiss Franc and the U.S. Dollar were the worst performing.

The fact that the British Pound was the best performing currency is a bit mindboggling. While the Sterling has been under pressure the past few weeks and may be considered t be oversold on some metrics, the fact remains that the fundamentals supporting the Sterling are deteriorating rapidly. The Bank of England meeting minutes released earlier today underscored this fact, which was dovish and suggested that more quantitative easing could come in the first quarter of 2012. As history has shown, using the U.S. Dollar as a case study, quantitative easing measures waters down the supply of currency in the system, thereby reducing its value. Going forward, despite today’s reaction, should quantitative easing measures be expanded by the Bank of England in the future, the Sterling should depreciate in value.

In terms of the other major currencies, the Euro found support on the rumors that the European Financial Stability Facility could be expanded should France and Germany reach agreement on a €2 trillion expansion of the bailout fund. Likewise, the Canadian Dollar was among the best performers ahead of trading in New York as market participants broadly believe that if the European sovereign debt crisis is contained, then the chances of a global recession are diminished greatly.

It is also worth noting a development in the Swiss Franc in the overnight. Although the Franc has not received much attention since the currency floor was established in early September, rumors have sprouted from time to time over the past 6-weeks that the currency floor against the Euro could be raised from 1.2000 to 1.2500 or even 1.3000. Today, research from a Swiss bank said that the Swiss National Bank is unlikely to raise the floor from its current level as it would be difficult to maintain. Accordingly, if this is the case, the EUR/CHF could easily fall back to test the 1.2000 floor; currently it trades just above 1.2400. 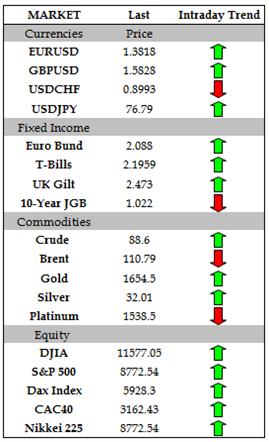 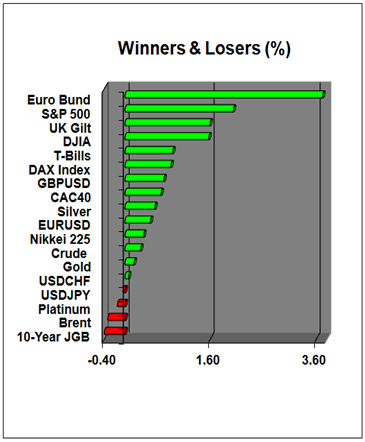 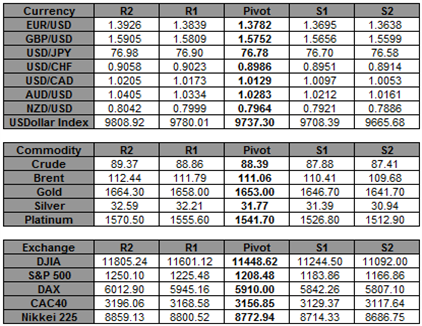