• Geithner to Press Europe to Move Faster on Crisis – Bloomberg

• Inside the Fed Fight Over Bond Buys – WSJ

While the recent correction has been fierce – most major global equity markets have climbed over 10 percent in the past seven trading days – in terms of the bigger picture, it has been modest at best. Taking at highs set across various benchmarks during the late-Spring and Summer, risk-correlated assets have retraced nearly 50 percent of their losses from lows set last Tuesday. Typically, in a bear market, sharp short covering rallies occur, in which market participation rates, as denoted by volume, are essentially nonexistent relative to recent averages. Such has been the case in not only spot but future markets as well, tending to the belief that the recent rally has been a correction, not a reversal of trend.

Wednesday could have been the turning point in the correction, given the notable developments witnessed across all asset classes, fundamentally and technically. On a technical basis, late in trading in New York, higher yielding currencies and the three major equity markets moved off of their highs shortly before the trading day ended, and meaningful follow through has been established in the first half of the trading day on Thursday.

Fundamentally, the trigger was the Federal Open Market Committee meeting minutes, which was released at 18:00 GMT, coinciding with the peak value in risk-correlated assets, such as the Australian Dollar, Euro, and U.S. equity markets. Although the minutes did not produce the market reaction that was expected – I was anticipating a sharper sell-off at the release – risk-appetite slowly eroded for the last hour-plus of the New York session, a trend that continued into Asia, save a tiny rally by the Aussie on better-than-expected employment data which was retraced.

Similar sentiment issued by the Federal Reserve was reiterated by the European Central Bank today, when the central bank released its monthly bulletin, their equivalent to the Federal Reserve’s minutes following the Open Market Committee meeting. The ECB noted that it “will continue to ensure that euro-area banks are not constrained on the liquidity side,” a clear sign that it is willing to extend currency swaps with the Federal Reserve if necessary in the coming months. It is important to note that the Governing Council clarified that “[A]ll the non-standard measures taken during the period of acute financial market tensions” are “temporary in nature.”

In response to the release, risk-correlated assets, and in particular the Euro, fell across the board against the Japanese Yen and the U.S. Dollar. The EUR/USD was down nearly 70-pips within an hour after the release. Similarly, the Australian Dollar and the New Zealand Dollar were down similar amounts against the Greenback.

The bounce across risk-correlated assets following the ECB bulletin, as shown in the chart above, was brief, as a good but nevertheless disappointing Italian bond auction further dampened investor sentiment. While the Italian Treasury was able to raise the maximum amount target for the 5-year bond, the bid-to-cover ratio wasn’t in line with expectations, suggesting that investors remain cautious to enter the market due to recent volatility. This point is further underscored by the fact that the European Central Bank was buying bonds, and without that support, a significantly worse auction would have occurred.

Looking ahead to the remainder of the day, we’re looking to the start of the U.S. session open as a possible cue in regards to price action Thursday. If S&P 500 volume is low relative to recent levels, expect equity markets and risk-correlated assets to move higher; on the other hand, if S&P 500 volume is trending higher than its recent averages (5-day average: 768.960 million shares; 20-day average: 934.499 million shares), expect equity markets and risk-correlated assets to depreciate. This notion is supported by the 5-day correlation between the S&P 500 value and volume at -0.67 (from -1.00 on Wednesday), and a deteriorating 20-day correlation, at -0.329 from -0.245 a week earlier. The negative correlation suggests that higher market participation rates beget sell-offs in higher yielding assets, such as the Australian Dollar and the S&P 500. 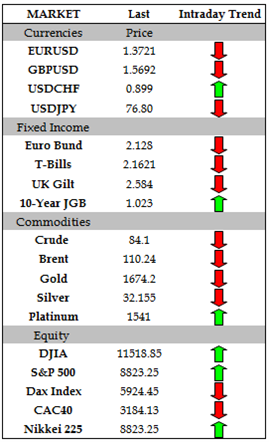 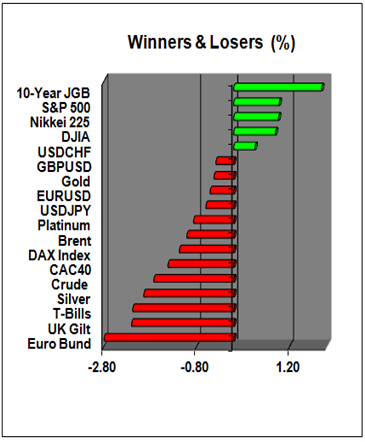 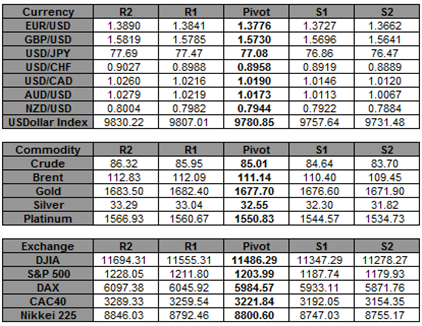