Headed into the last thirty minutes of trading, with U.S. equity markets and the commodity currencies holding above session lows, there was little reason to be bullish. However, after a report from the Financial Times quoted European Union Economic and Monetary Commissioner Olli Rehn as saying that there’s an “increasingly shared view” that the region needs a coordinated approach to halt the debt crisis, markets quickly set aside any hesitation and surged higher. U.S. equity markets surged over three percent in the last thirty minutes, while the Australian Dollar, Canadian Dollar and Euro saw nearly 200-pip, 150-pip and 120-pip moves against the U.S. Dollar, respectively.

The rally comes after a disappointing slew of information over the weekend and early part of the week. Yesterday, European officials hinted that private bondholders may be encumbered with bigger losses on Greek debt. The question of who would take the lion’s share of write-downs – bondholders or European governments – has been a sticking point for the core Euro-zone countries. Yesterday’s development that bondholders may be forced to take a bigger hit suggests that the deal for a second aid package to Greece may be unraveling.

In terms of which took precedence in market participants’ minds – the quote by Mr. Rehn or the unraveling of the second Greek bailout package – it appears that Asian and European participants took to the latter. Asian equity markets were mixed if not slightly lower, while European equity markets were coming off session highs ahead of North American trading. Currency markets were more indicative of this notion, with the Japanese Yen and U.S. Dollar the strongest performers among the major currencies, save the Australian Dollar (which was unchanged against the U.S. Dollar, at the time this report was written).

The lack of follow through on yesterday’s end of day rally appears to be with good reason. A spokesman for Mr. Rehn, the European Union Economic and Monetary Commissioner, refuted the Financial Times report, saying that there’s no concrete plan to recapitalize banks. Similarly, in the wake of the downgrade of Italy, Moody’s Investor Services said that European countries with debt levels below the top ‘Aaa’ level may see their rating reduced. This statement is most likely directed at France, which raises the potential issue of funding for the European Financial Stability Facility. If France loses its top rating, the amount of funds it will be able to contribute to the EFSF will likely be reduced, placing a bigger burden on an already hesitant Germany. This remains one of the most important situations to monitor in the weeks ahead.

Ahead of the North American session, labor market data released painted a dim picture on the employment environment in September. The Challenger jobs cuts report showed that U.S. employers announced the most job cuts in more than two-years in September. The bulk of the firings were due to planned reductions by Bank of America and in the military. The 212 percent jump in announced firings, the most since January 2009, may not be indicative of current weakness in the job market, but is certainly a harbinger of potentially difficult times ahead. The data comes ahead of Friday’s key nonfarm payrolls report, which suggests that the economy added 60K jobs in September, according to a recent survey by Bloomberg News. 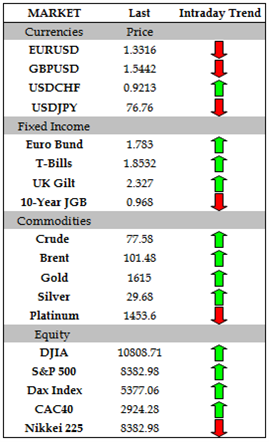 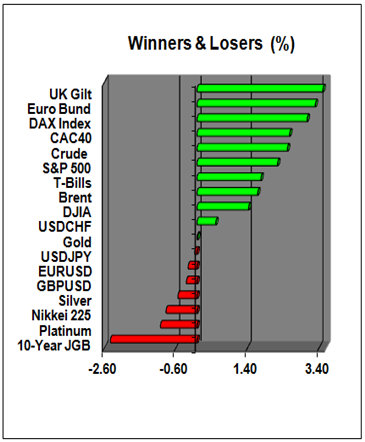 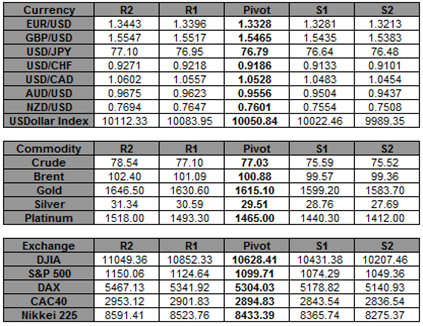