The safe haven currencies – the Japanese Yen, the Swiss Franc and the U.S. Dollar – were bid higher in the Asian and European sessions as a dovish Reserve Bank of Australia coupled with the looming Senate vote on the most recent debt ceiling legislation weighed on market participants’ appetite for riskier assets. Indeed, even though the Reserve Bank of Australia’s decision to hold the key interest rate at 4.75 was widely anticipated by the markets, the ensuing commentary was too dovish for most, resulting in the Australian Dollar selling off across the board, posting the greatest depreciation on the day among the major currencies.

In news out of the European session, the Euro started to show signs of breaking down once more against the safe havens as a European Commission spokeswoman told reports that Cyprus, whose credit rating was cut last week by Moody’s Investor Service and Standard & Poor’s, would not receive a rescue package, a scenario that is “absolutely not on the table.” Similarly, the spokeswoman noted that bailouts for Italy and Spain aren’t being considered, as the countries are “taking the necessary actions to put their economies back on track…[Italy and Spain are] taking the necessary action toward fiscal consolidation,” and the European Commission is “very confident” they will succeed in reigning in their spending.The hesitant stance rippled across various asset classes, with Italian and Spanish 10-year governments bonds plummeting in the European session, with yields climbing to records (since the Euro was established) against their German counterpart.

On the other side of the exodus from risk in the Asian and European sessions were strong performances by the Dollar, Franc and Yen following the dismal outlook from the Reserve Bank of Australia and the disconcerting stance European Union institutions are taking, even as the U.S. debt crisis appears to be culminating in resolution that would help the world’s largest economy avoid default on its obligations. The Euro-Franc pair fell to an all-time low of 1.0986, boosted by stronger-than-expected retail sales and manufacturing data from Switzerland. The Franc is expected to remain strong even as the U.S. debt crisis is resolved, while continued uncertainties in Europe, in conjunction with the fact that the Swiss economy’s underlying fundamentals remain strong, make the funding currency an appealing trade.

In data out in the pre-North American trade, personal spending figures out of the United States underperformed expectations by contracting 0.2 percent in June while the forecast, according to a Bloomberg News survey, had the figure expanding by 0.1 percent. Following the release, the Greenback dropped slightly across the board, most notably against the Swiss Franc, further bolstering demand for the European safe haven.

The slowed number of purchases is most likely a symptom of the weak conditions recently exhibited in the labor market. The dearth of jobs combined with a sudden uptick in inflation that has outstripped wage increases led to the large dents in consumer spending which resulted in today’s poor data. Consumers have been particularly hit by rising fuel and commodity costs. Unfortunately, this trend is showing no signs of reversing and may cause consumers to cut back even more on spending.

Looking ahead to later in the day, the U.S. Senate is expected to vote on legislation that would prevent the government from defaulting on some of its obligations. On Sunday, President Barack Obama revealed the plan, as agreed on by Congressional leaders, which cuts approximately $1 trillion over the next decade, primarily based on reduced spending and a relief of “Bush-era” tax cuts, in exchange for a near-term hike in the debt ceiling. The more-conservative and Republican controlled House of Representatives, seemingly the stepping stone to avoiding default, passed the bipartisan legislation on Monday after North American trade closed; volatility is likely to remain high headed into the vote. 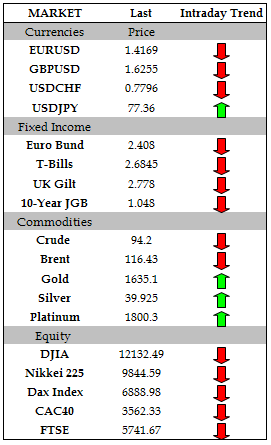 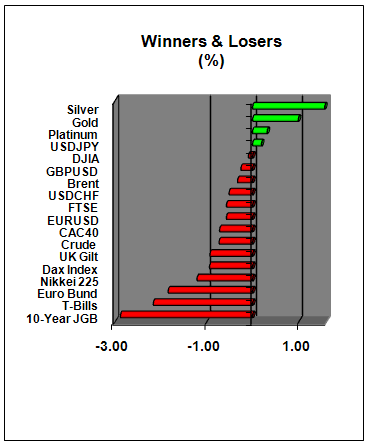 AUDCHF: The Aussie-Franc pair was the weakest on Tuesday, as the fundamental environment that developed in the overnight led to a further shift in capital into Franc-denominated assets while the Australian Dollar fell off across the board on the surprisingly dovish commentary from Reserve Bank of Australia Governor Glenn Stevens. As uncertainty remains over the sovereign debt issues in Europe and the global economy continues to show signs of weakening, risk could be tapering off for sometime unless the upcoming rounds of significant data suggest that the recent slowdown was, in fact, a “soft patch.”

Taking a look at price action, the AUD/CHF pair is heading towards technical extremes, unable to find support even as the debt crises on either side of the Atlantic are seemingly finding near-term relief. The daily RSI is nearing oversold territory, at 31, as the pair has fallen nearly 400-pips in the past three trading days. Similarly, the MACD Histogram and the Slow Stochastic oscillator have both issued sell signals, with the former moving into a bearish divergence, with the differential at -26, while the latter trends lower, with the %K less than the %D, at 15 and 31, respectively. For now, given the deteriorating rate expectations for the Aussie, pressure is likely to remain on the antipodean currency, regardless of risk sentiment in the near-term.