The U.S. Dollar was offered lower across the major currencies in the Asian and European sessions as it remains abundantly clear that neither Democrats nor Republicans are willing to give way from their political ideologies, pushing the world’s largest economy closer to the brink of default. The repercussions would be immense, as President Barack Obama noted last night at a press conference, shortly after the start of Asian trade on Tuesday.

President Obama was particularly stern in his approach to addressing the deadlock, firing shots across the Republican party’s ideological bow, noting that House Republicans “refuse to weigh balanced approach,” creating the threat that a default would spark a “deep economic crisis.” The past few days have yielded some unexpected results in the debt debate, as it was largely assumed that after U.S. lawmakers bantered back and forth in efforts to sway public opinion, a deal would eventually have been struck. In actuality, and on the contrary, the current positions lawmakers on both sides of the aisle are entrenched in appear to be statements of definitive policy, rather than merely political posturing.

The U.S. Dollar was crushed in the overnight on such news, dampening hope that a permanent fix to the debt ceiling – perhaps a mixture of a debt ceiling hike, an increase in revenue via an increase in taxes and a decrease in spending – would be enacted ahead of the tentative August 2 deadline (even though it is now being floated that August 10 is the new deadline, as the U.S. Treasury has collected more payments than expected in recent weeks).

Far and away, the Greenback lost the most ground against the pair of antipodean currencies, as market participants allocated funds away from the world’s currency and into higher yielding assets for the time being – this could all change should the U.S. government default on its obligations. At the time this report was written, the Aussie was up 0.94 percent against the Dollar, while the Kiwi was up 0.69 percent. The Aussie is trading close to its all-time high against the Greenback, set on May 2, when it traded at a 1.1011 exchange rate; the Kiwi hit its all-time high today, at 0.8742.

On the day thus far, the Dow Jones FXCM Dollar Index traded much lower today, down to 9388.46 at the time this report was written, falling consistently since the start of the session on Tuesday. The index opened at 9457.34, and traded as high as 9469.95, before hitting a session low of 9374.85 at approximately 12:30 GMT. 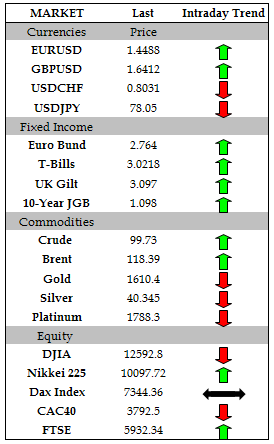 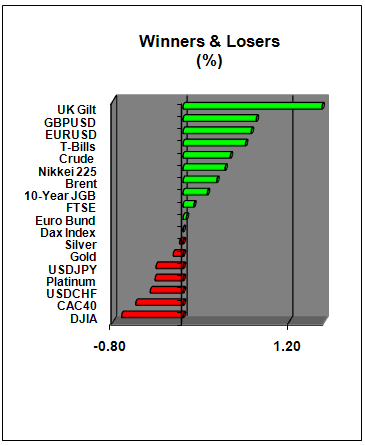 NZDUSD: While the AUD/USD pair was the strongest pair on Tuesday thus far, at the time this report was written, perhaps the most remarkable performance continues to be that of the New Zealand Dollar, as it has been the world’s strongest performer since mid-March. The NZD/USD pair hit an all-time high of 0.8742 today, before paring back gains towards 0.8703. In spite of the global economy teetering on the brink of a massive breakdown, the Kiwi, typically viewed as a risky asset, has gained all but five trading days in the month of July, even as the respective American and Euro-zone debt crises have plagued investor sentiment.

Taking a look at price action, the pair remains in unchartered territory, and as the trend continues higher, it’s unwise to bet against the currency, in terms of trying to identify a top. While technical indicators suggest that the Kiwi needs to breakdown in the near-term, given its strong relationship to commodities, in particular, precious metals, as the alternative safe havens are bid higher as investors shift capital from fiat currencies to commodities in the face of a fragile global financial system, the Kiwi, as well as the Australian Dollar, could be bid higher for the near-term.