The gains on the day for the Euro, however, were cut short just ahead of the open of the North American trade on Tuesday, as German Prime Minister Angela Merkel’s dovish commentary hit the newswires, painting a bleak outlook for Thursday’s gathering of European Union officials. While Merkel called on the larger European Union nations to help the periphery countries, noting that the European sovereign debt crisis must be solved “from the core,” she did note that Thursday’s meeting would not give the markets the “spectacular” step on the Euro, as hoped for.

On the heels of her commentary, the Euro plummeted across the board, falling approximately 45-pips in under 10-minutes against the U.S. Dollar. Similar reactions were seen in the EUR/CHF pair and EUR/JPY pair. Following Friday’s surprise announcement by European Union President Herman Van Rompuy, it’s clear that the Euro-zone sovereign debt crisis is worsening at a pace faster-than-expected, so an emergency meeting is certainly not a strong sign for the currency bloc’s health.

After multiple downgrades over the past few weeks from the major rating agencies, European bonds’ yields have soared, drawing speculation that the Euro-zone is on the verge of breaking up. Nonetheless, Tuesday’s trading activity in the Asian and European sessions showed some relief to European bond markets, with the Italian and Spanish 2-year government bonds’ yields falling, back to 4.178 and 4.172, respectively.

In the major news on the day ahead of the North American session open, the Bank of Canada announced that it would maintained its target for the overnight benchmark rate at 1.00 percent, with the Bank Rate at 1.25 percent and the deposit rate at 0.75 percent. The Bank of Canada noted that “the economic expansion is proceeding largely as expected,” and that “despite increased global risk aversion, financial conditions in Canada remain very stimulative and private credit growth is strong.” The Canadian Dollar took kindly to the commentary, in particular to the notion that, in regards to stimulus, “such reduction would need to be carefully considered,” finding the overall tone of the decision to be hawkish. As such, the Loonie found strength across the board, becoming the day’s strongest performing currency, with the USD/CAD pair depreciating from approximately 0.9550 ahead of the decision, to as low as 0.9515, at the time this report was written.

In regards to other economic conditions noted by the Bank of Canada, “Following an anticipated slowdown in growth during the second quarter due to temporary supply chain disruptions and the impact of higher energy prices on consumption, the Bank expects growth in Canada to re-accelerate in the second half of 2011.” Similarly, “Overall, the Bank projects the economy will expand by 2.8 percent in 2011, 2.6 percent in 2012, and 2.1 percent in 2013, returning to capacity in the middle of 2012.”

The inflation environment in Canada remains well-tethered, though total CPI inflation “is expected to remain above 3 percent in the near term.” As noted in the chart below, the number of basis-points priced into the Canadian Dollar over the next 12-months fell steadily over the second quarter of the year, and thus far into the first month of the third quarter; however, on the hawkish commentary, it is expected that these expectations will shift further in favor of the Loonie, and the currency will continue to appreciate against the U.S. Dollar and other safe havens.

In summation, the Bank of Canada made the following statement: “Reflecting all of these factors, the Bank has decided to maintain the target for the overnight rate at 1 percent. To the extent that the expansion continues and the current material excess supply in the economy is gradually absorbed, some of the considerable monetary policy stimulus currently in place will be withdrawn, consistent with achieving the 2 percent inflation target. Such reduction would need to be carefully considered.” 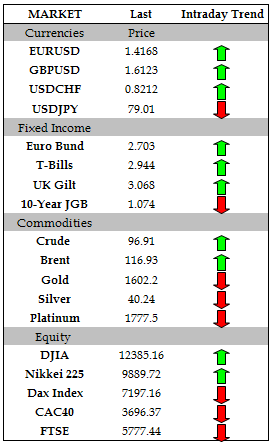 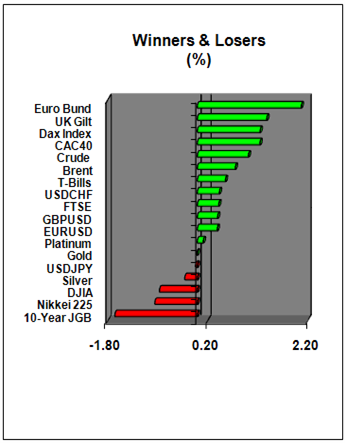 USDCAD: The USD/CAD pair continued to trade lower following the release, as it’s clear that, in spite of economic woes in Europe and the United States, the Canadian economy remains robust and well-insulated from global macro woes that taking a heavy toll on other advanced economies. With interest rate differentials shifting clearly in favor of the Loonie, and with the debt ceiling crisis in the United States continuing to weigh on the Greenback, the Loonie stands to appreciate further against its American counterpart.

Taking a look at price action, the USD/CAD pair is trading clearly to the downside, with its 20-DMA moving lower than both its 50-DMA and 100-DMA, suggesting that the trend has shifted notably to the downside. As such, on further resolution of the debt crises on either side of the Atlantic Ocean, the Loonie could gain further on speculation that growth in the United States will translate into greater demand for oil from Canada, the largest exporter of oil to the United States. While the pair is in oversold territory on the Slow Stochastic oscillator, the daily RSI, at 38, points towards further losses before a technical rebound, while the MACD Histogram’s differential has widened further into a bearish divergence, suggesting that momentum remains entrenched to the downside in the near-term for the Dollar-Loonie pair.