The safe haven currencies were the strongest performers in the pre-North American trade as the markets continued to collectively digest the results of Friday’s European stress tests. The tests, administered by the European Banking Authority, showed that while only eight banks failed, sixteen additional institutions were at risk of failing as well. As such, market participants offered risk lower on Monday, with the commodity currencies and the European Euro sliding against the Japanese Yen, Swiss Franc and U.S. Dollar.

Indeed, as market participants seemingly doubted the validity of the tests, concerns over contagion from the Euro-zone took hold of the markets, with investors fleeing riskier assets, such as equity markets, and into bonds and other havens. While the U.S. 10-year Treasury Note gained to 2.900 percent, the PIIGS bonds’ yields soared, with the Greek 10-year government bond falling to 17.209 percent. Similarly, the Italian and Spanish 10-year bonds also plummeted, to 5.893 percent and 6.233 percent, respectively.

Also trading higher ahead of the North American session were precious metals, with COMEX Gold surging to an all-time high of 1603.28 earlier in the day. The rally denotes a significant decoupling in the recent correlation Gold has had with risk-appetite; market participants, over the past 10-months, have bid up Gold and other commodities alongside riskier assets, such as the Australian Dollar, when seeking risk. The Aussie fell to 1.0692, at the time this report was written, on the day Monday, amid diminishing rate hike expectations.

The Dow Jones FXCM Dollar Index traded mostly sideways to start the day, though was up for the third consecutive day, on the global shift to safe havens as it appeared Democrats and Republicans had found a bipartisan solution to solving the impending debt ceiling breach. At the time this report was written, the index was trading at 9626.43, slightly lower than the session high of 9642.09. Confidence appeared to be rising in the Greenback once more, as U.S. Treasury Secretary Tim Geithner said, "Despite what you hear, people are moving closer together. You have seen the leadership of the Republican party ... take default off the table. That's encouraging.” 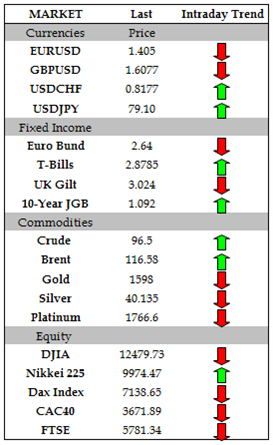 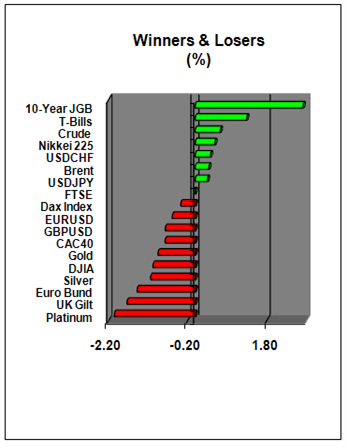 • Default ‘Off the Table,’ Debt Deal Will Be Struck – CNBC

AUDUSD: The AUD/USD was offered lower for the third consecutive day, as market participants shifted capital to safer assets following the disappointing European stress tests. In news more directly affecting the Australian Dollar, on Friday, Westpac, one of Australia’s “big four” banks, announced that it was lowering growth expectations for the antipodean nation, while also suggesting that the Reserve Bank of Australia needed to cut rates later in the year. Indeed, the markets took the news seriously, with the Overnight Index Swaps showing there is a 21.0-percent chance of a 25.0-basis point rate cut at the next meeting, and 55.0-basis points priced out of the Aussie for the next 12-months.

Taking a look at price action, the AUD/USD pair gapped lower over the weekend, breaking through a significant zone of technical support, in the 1.0649 to 1.0642 area, where the 20-DMA and 50-DMA converge. That being said, the break lower suggests that former support is now near-term resistance. Momentum is forecasted to drag that pair lower, with the daily RSI falling, now at 46. Similarly, the Slow Stochastic oscillator is showing a sell signal, with the %K less than the %D, at 60 and 71, respectively.