The Japanese Yen and the Swiss Franc were the two strongest currencies in the pre-North American session as the crucial jobs report for June from the United States fell short of expectations by 83 percent. The Labor Department’s report issued today showed that U.S. employers added 18K jobs in June, well below the 105K forecast, according to a Bloomberg News survey. The slight increase in jobs added to the economy was below May’s equally disappointing figure, which was revised down to 25K.

The U.S. Dollar had an extremely choppy reaction, initially climbing across the board, as market participants fled to safety amid concerns that the world’s largest economy is indeed entering a second leg down in a double-dip recession, rather than a “soft patch,” as government officials have dubbed it. However, the Euro-Dollar pair had the most interesting reaction, as it climbed nearly 140-pips after falling by 40-pips immediately after the release.

The Dollar gained across the board against the riskier currencies, with the Australian Dollar and Canadian Dollar taking the biggest losses. The Canadian Dollar tends to more sensitive to data out of the United States than the other commodity currencies, given the inextricable links between the American and Canadian economies; Canada is the number one oil of exporter to the United States, so a slowdown in U.S. growth signals a potential slowdown in future Canadian growth. The USD/CAD pair was up 0.41 percent at the time this report was written.

When fleshing out the report, it’s hard to find a silver lining; nearly every sector posted disappointing numbers. The headline unemployment rate figure rose from 9.1 percent in May to 9.2 percent in June, out of line with Federal Reserve Chairman Ben Bernanke’s disposition that he “expect[s] the unemployment rate to continue to decline.” Unemployment rose even as the participation rate fell to 64.1 percent, the lowest such rate since March 1984.

The household component of the survey showed a 445K decrease in employment, and a 173L increase in unemployment. The private sector continued to struggle, rising by 57K in June after gaining 73K in May; the private sector was projected to have gained 132K jobs. In terms of positive data, factory payrolls rose by 6K in June after falling by 2K in May, while government payrolls shrunk by 39K in June, the eighth consecutive monthly decline. Still, this ‘silver lining’ pales in comparison to any otherwise exceptionally disappointing jobs report.

Following the release of the NFP data, the Dow Jones FXCM Dollar Index fell from a near-session high of 9656.66 to as low as 9596.10. While ‘risk-off’ was the theme following the report, it was clear that the gains by the Euro against the Greenback were severely weighing on the index. At the time this report was written, the index was trading at 9608.64. 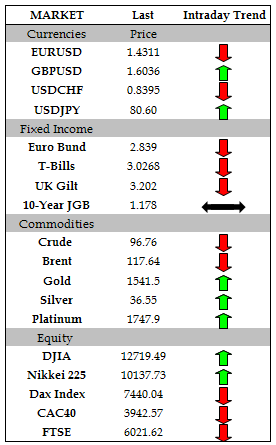 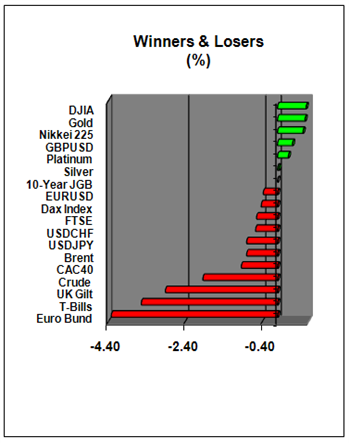 USDJPY: The USD/JPY pair was the most active following the release, falling nearly 80-pips in the immediate aftermath of the release. While the move wasn’t indicative of Yen strength, it was more representative of Dollar weakness, as market participants shifted their safe haven capital to the Yen, as well as the Franc, as concerns over the health of the U.S. economy grew.

Taking a look at price action, the USD/JPY pair easily broke below its key 81.000 pivot level. While the pair was pointing towards a further appreciation, especially considering the recent moves in the Treasury markets, today’s move has started to shift the par back towards a bearish bias. The daily RSI completely reversed course, falling to 48 from 57 yesterday. The Slow Stochastic oscillator also turned to the downside, issuing a sell signal today, with the %K falling below the %D, at 66 and 73. The move wasn’t completely unexpected, in the technical sense, as an earlier test of the 81.279 level, the upper envelope of the 20-day Bollinger Band suggested depreciation was in store.