The Euro gained in the overnight, rallying nearly 100-pips against the U.S. Dollar at the beginning of the European session, as the markets were flooded with optimism following commentary by French President Nicolas Sarkozy that French lenders were close to agreeing to a 70 percent rollover on Greek debt. The deal would market a significant step forward in the debt negotiations, as France’s involvement with private lenders would denote a new rescue plan that could potentially stave off default for the embattled periphery nation, as Sarkozy noted that “We don’t let Greece Fall. We will defend the euro. It’s in all of our interests.”

The plan, in its current form, would get private lenders to reinvest 50 percent of Athenian loan repayments into new 30-year loans, with the other 20 percent of repayments entering a fund to act as a guarantee to make the newly-issued Greek debt appear more stable.

The Euro-Dollar has found support in the pre-North American session after U.S. consumer spending data fell short of expectations in May, according to a Bloomberg News survey. The headline figure of 0.0 percent in May disappointed the 0.1 percent forecast, as it appears American consumers are cutting back on their spending amid higher inflationary pressures and an unstable labor market. The data falls in line, however, with the Federal Reserve’s estimate that growth would be trimmed in the coming months, so what normally would have been disappointing data was somewhat anticipated by the market.

Other data released in the pre-North American hours showed that personal income rose by 0.3 percent in May, after rising by a revised 0.3 percent in the prior month, falling short of the 0.4 percent expectation. Personal income for Americans has been rising at a steady pace since September 2010, the last time the measure was unchanged. Income expanded the most n January 2011, at a 1.1 percent pace. With May’s income figure growing while the spending figure remained the same, the savings rate rose to 5.0 percent from 4.9 percent in April.

In the wake of the release, the Dow Jones FXCM Dollar Index initially rose, from 9721.27, to as high as 9729.78. At the time this report was written, the index had fallen back to 9725.35. With the Dollar holding as the strongest currency in the overnight session, it is possible that further gains for the index continue into the North American session, as the trade-weighted index remains higher off of its session lows of 9696.28. 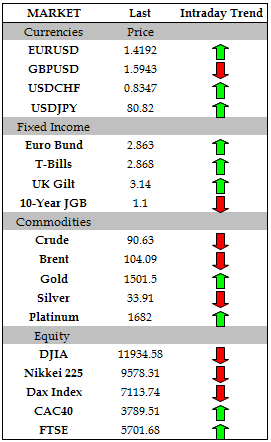 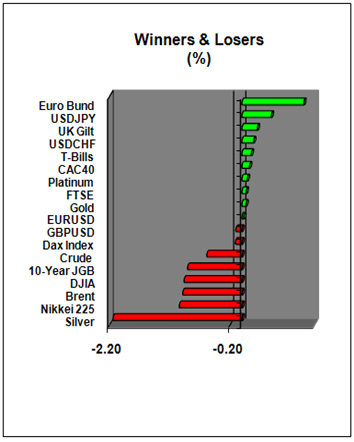 • Consumers Pulling Back on Spending as Inflation Builds – CNBC

NZDUSD: The Kiwi-Dollar pair was the most disappointing performer in the Asian and European sessions, falling back 1.27 percent at the time this report was written. The antipodean currency faced increasing headwinds in the overnight as trade balance data from May fell short of expectations, a 605M balance versus 1000M expected, down from a revised 1148M figure in April. Exports declined slightly, though the greater-than-expected boost in imports weighed on the aggregate figure. The Kiwi, the strongest currency across the majors since mid-March, has boosted domestic demand for foreign goods, as New Zealanders have stronger purchasing power abroad.

Taking a look at price action, the NZD/USD pair has fallen below its 50-DMA today at 0.80356, with 0.8000 as the next level of major psychological support. The pair has remained above the key 0.8000 exchange rate since May 26, but a break below with meaningful follow through (consecutive days closing below said rate) would expose the next major level of support at 0.7797, the 100-DMA. The daily RSI points towards further losses, with it having fallen to 47 from 55 last Wednesday. Similarly, the NZD/USD pair’s MACD Histogram is widening into a bearish divergence, now at -19. Also pointing towards further losses is the Slow Stochastic oscillator, which, after having issued a sell signal on June 24, is trending lower, with the %K less than the %D, at 38 and 44, respectively.