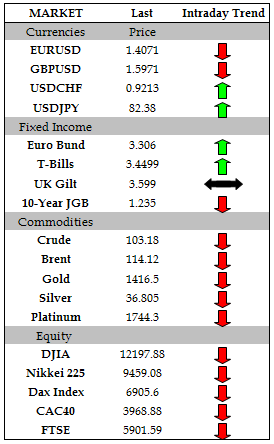 Once again, the Swiss Franc and Japanese Yen were among the two biggest decliners intraday, as investors found renewed risk appetite, in light of the fact that the funding currencies are typically viewed as safe havens against risky assets. Certainty appears to have begun to arise that the Bank of Japan would continue easing in order to weaken the Yen, to such a point that interventions would outperform repatriation speculation, which had sent the Yen higher in the days following the natural disasters and the start of the nuclear crisis. As I noted last week, “Despite increased headwinds to the recovery – the natural disasters in Japan, spreading turmoil in the Middle East and North Africa region, further sovereign debt issues in Europe, and rising inflationary pressures around the globe – it is clear that broader market sentiment believes the recovery remains on the right path.” This sentiment appears to be gathering strength, with the Yen and Franc hundreds of pips lower against higher yielding currencies, such as the Aussie, Kiwi, and Loonie, over the past few days. 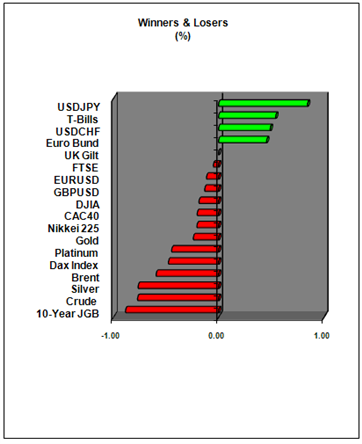 USDJPY: The USD/JPY pair advanced as much as 0.8 percent in the overnight, as the Yen was the weakest currency against its American counterpart. The pair continued its advance following the March 17 widespread Yen appreciation as traders began to ramp up bets that Bank of Japan intervention would ultimately out-muscle bullish Yen bets on repatriation by speculators. To this end, it appears, given the widespread extent of the damage, that the Bank of Japan is going to be forced to leave rates on hold well into 2012, which has increased interest rate yields between the Yen and other currencies, sending the Pacific Rim currency even lower. Widening spreads for the remainder of the year and into 2012 would result in a broad based Yen depreciation.

Taking a look at price action, a key level at 81.073 appears to be a level of resistance, as the pair has been unable to hold above this point for consecutive days. After the USD/JPY pair’s decline last week following the earthquake and tsunami on repatriation rumors, the pair has held above its 0.00 Fibo retracement at 80.242 on its September 15 to November first move. Cutting off the candlestick wicks on the daily chart ad smoothing the data from March 15 to March 21, in order to account for the Bank of Japan liquidity injection as well as the combined forex intervention, it appears that the USD/JPY pair is holding above its range bottom of a descending channel, but is failing to break above its 20-SMA. If the repatriation scenario appears to have been overblown, the Yen could see further declines across the board as speculators wind down their bets of a stronger Pacific Rim currency.