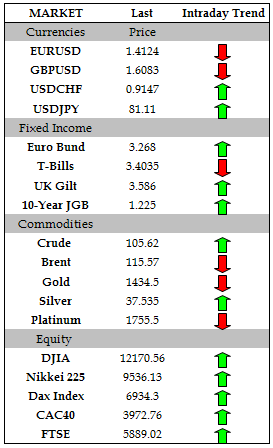 Typically viewed as safe haven currencies, the Swiss Franc and Japanese Yen declined against a basket of major currencies as traders ramped up bets that the major economies would be able to withstand recent economic woes and continue on the path to recovery. Despite increased headwinds to the recovery – the natural disasters in Japan, spreading turmoil in the Middle East and North Africa region, further sovereign debt issues in Europe, and rising inflationary pressures around the globe – it is clear that broader market sentiment believes the recovery remains on the right path. 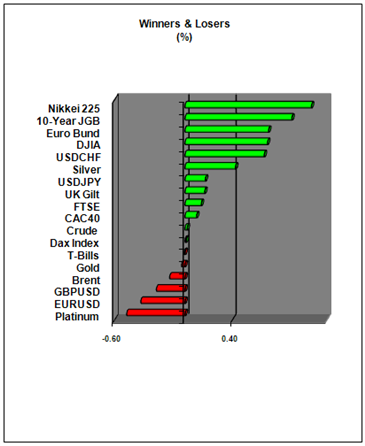 • Reactor Core May Be Breached at Damaged Fukushima Plant - Bloomberg

USDJPY: The USD/JPY pair advanced in the overnight session as the markets adjusted their view of how funds would be sent back to Japan. Following a report by the Finance Ministry in Tokyo which showed that purchases of foreign assets exceeded sales of foreign assets by ¥291 billion, the Yen fell against a basket of major currencies. It appears that speculation on the repatriation of funds back to Japan may be a bit overblown, as investors remain net buyers of bonds, no sellers. Similarly, downward pressure remains on the Yen, as the Bank of Japan is unlikely to raise interest rates any time soon, amid the deflationary environment and the necessity to boost exports in order to help propel a recovery forward.

Taking a look at price action, a key level at 81.073 appears to be a level of resistance, as the pair has been unable to hold above this point for consecutive days. After the USD/JPY pair’s decline last week following the earthquake and tsunami on repatriation rumors, the pair has held above its 0.00 Fibo retracement at 80.242 on its September 15 to November first move. Cutting off the candlestick wicks on the daily chart ad smoothing the data from March 15 to March 21, in order to account for the Bank of Japan liquidity injection as well as the combined forex intervention, it appears that the USD/JPY pair is holding above its range bottom of a descending channel, but is failing to break above its 20-SMA. If the repatriation scenario appears to have been overblown, the Yen could see further declines across the board as speculators wind down their bets of a stronger Pacific Rim currency.