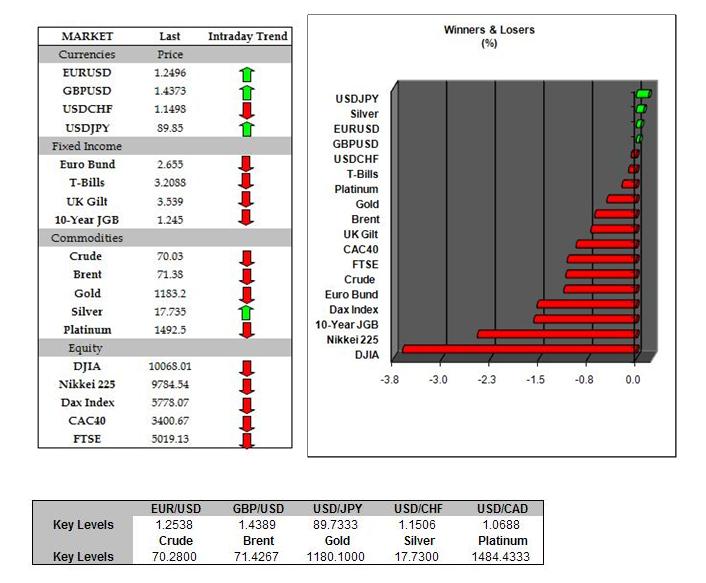 
EUR/USD – German business confidence in May pushed lower from the previous month as the European debt crisis continues to rattle global markets despite European policy makers announcing a plan for indebted countries worth nearly $1 trillion. The IFO in Munich said that its business climate index pulled back from 101.6 in April to 101.5 this month, while economists were expecting the reading to rise to 101.9. At the same time, the IFO’s gauge of the current situation rose to 99.4 from in May from 99.3 the month prior, while expectations slip to 103.7 from 104.0 during the same time period. Indeed, fears of Greece’s debt contagion continues to be a main concern for market participants as many investors do not believe that the EU/IMF plan will be enough to prevent the crisis from spreading onto other European countries. Meanwhile, a separate report showed that Growth in Europe’s services and manufacturing slowed more than expectations, and companies may now have to rely on a weaker euro to boost export growth as the fiscal crisis continues to weighs on consumer confidence.  Nevertheless, ECB’s Governing Council member Orphanides said independent central banks enjoy more flexibility to engage in non-standard measures during crises, and went onto add that the central bank must remain focused on price stability. Looking ahead, euro-region recovery may remain fragile as countries battles ts fiscal crisis paired with a weak labor market. To discuss this and other topics, please visit the EUR/USD forum.


GBP/USD – Public sector net borrowing in April posted the largest shortfall since monthly records began in 1993. The 10 billion-pound deficit was compared to a revised 8.8B pounds the previous year, while economists were expecting the reading to come in at 10.9B pounds. Going forward, the U.K. may have to implement spending cuts and increase taxes in order to dig themselves out of the hole. Thus far, Chancellor of the Exchequer George Osborne has ordered departments to find 6 billion pounds of savings this year and will set out further measures in his June 22nd budget. Therefore, if spending cuts are initiated, retail companies may be one of the sectors mostly impacted by the decision in the near term. Nevertheless, mortgage approvals in the region fell in April to the lowest in almost a year as tighter credit conditions curbed demand from first time buyers. Looking ahead, policy makers are likely to keep rates near zero as risks to the U.K. have grown amid fears of Greece’s fiscal crisis spreading across Europe, while the central bank expects inflation to hold slightly above 2% this year as the slack in the economy tapers consumer prices.  To discuss this and other topics, please visit the EUR/USD forum.