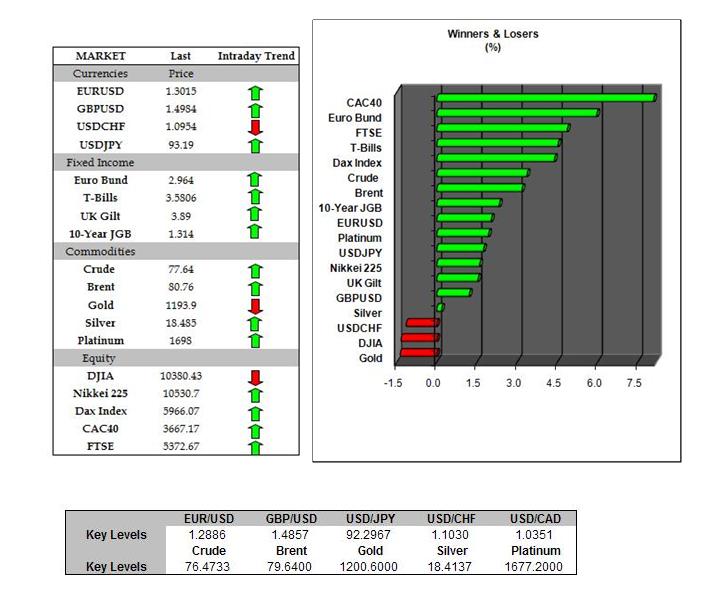 
EUR/USD – European policy makers unveiled a stabilization plan worth almost $1 trillion in order to combat speculation that the 11-year old euro may break apart as sovereign debt crisis flares. Taking a look at the breakdown of the rescue plan, Euro-area governments pledged to make 440 billion euro’s available, with a contribution of 60 billion euro’s from the European Union’s budget, and 250 billion euro’s from the International Monetary Fund. The plan was a clear development for risk appetite as the euro rallied across the board on Monday, but pressure is likely to return in the medium term as questions arise concerning how they will pay for the package when they all need fiscal consolidation.  Additionally, the Federal Reserve announced that it will restart its emergency currency – swap tool by providing as many dollars as needed to European central banks to keep the continent’s sovereign-debt crisis from spreading. Meanwhile, European investor confidence in May fell the most in almost two years amid fears of Greek contagion. Figures showed that the index measuring sentiment in the 16-nation euro region plunged to -6.4 from 2.5 April  to exceed economists’ expectations of -1.0, falling the most in almost two years.  To discuss and other topics, please visit the EUR/USD forum.


GBP/USD – The Bank of England maintained their benchmark interest rate at 0.50% and held their asset purchase plan at 200 billion as widely expected as post-election vacuum and the Greek debt crisis overshadowed growth in the economy. Going forward, investors are likely to closely monitor the Bank of England quarterly inflation report on May 12th after MP’s entered a fourth day of discussion in forming a coalition and a mutual agreement regarding how to tackle the country’s boiling deficit.  Nevertheless, Nick Clegg’s Liberal Democrats agreed to continue talks with Conservative David Cameron after the U.K. election led to a hung parliament, and the leader went onto say that prolonged uncertainty is not a good thing. Mr. Clegg later stated “bear with us a little bit longer” as stability is the most important thing. As inflation pressures increase, while potential contagion of euro-zone debt crisis linger, statements from the Bank of England are sure provide clear direction for the pound going forward. To discuss and other topics, please visit the EUR/USD forum.