In this series we scale-back and look at the broader technical picture to gain a bit more perspective on where we are in trend. Crude Oil has rallied every day since the start of the year with price now eyeing initial resistance targets. We’re looking for a reaction off this mark to offer guidance on whether a more significant low was registered last month, or whether this is simply a corrective bounce. Here are the key targets & invalidation levels that matter on the Crude oil weekly chart into the start of the year.

New to Oil Trading? Get started with this Free How to Trade Crude Oil Beginners Guide 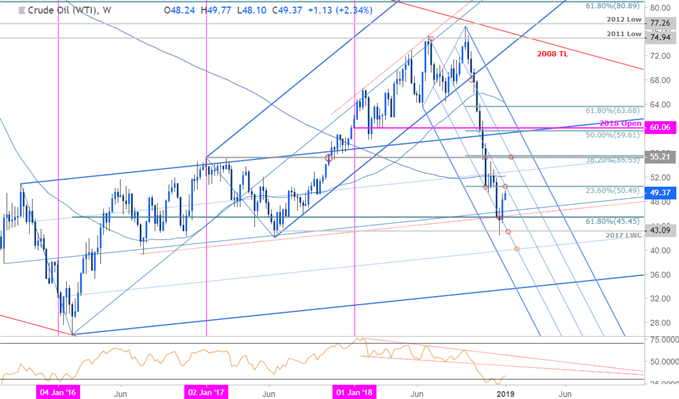 Notes: In last month’s Crude Oil Weekly Technical Outlook we noted that a break below confluence support at 45.45, ‘would risk substantial losses for crude with subsequent support objectives eyed at the 2017 low-week close at 43.09 and the highlighted slope confluence near the 40-handle.” Price registered a low at 42.34 into the close of the year before mounting a rally of more than 17% over the past three weeks. So, was that the low?

While it’s still too early to confirm, the technicals do highlight some interesting factors to consider. Last week’s advance marked the single largest one-week rally since mid-June – in that instance, crude rallied for two weeks before falling into a range which held the low for nearly 19-weeks before breaking. While this is just an anecdotal observation, it’s worth noting that weekly RSI is attempting to recover from oversold territory with price poised to mark the longest consecutive daily advance since May (in that instance price peeked nearly two-week later).

Bottom line: The immediate focus is on a reaction off resistance confluence just higher around 50.49. From a trading standpoint, the threat remains for a pullback off this mark but IF price has registered a more important low, losses should not surpass 45 on a weekly close basis. Nothing should be attempted on the long-side here until we get another test / failure on a move towards the December lows. Ultimately, a pullback may offer more favorable long-entries while above the monthly / yearly open. 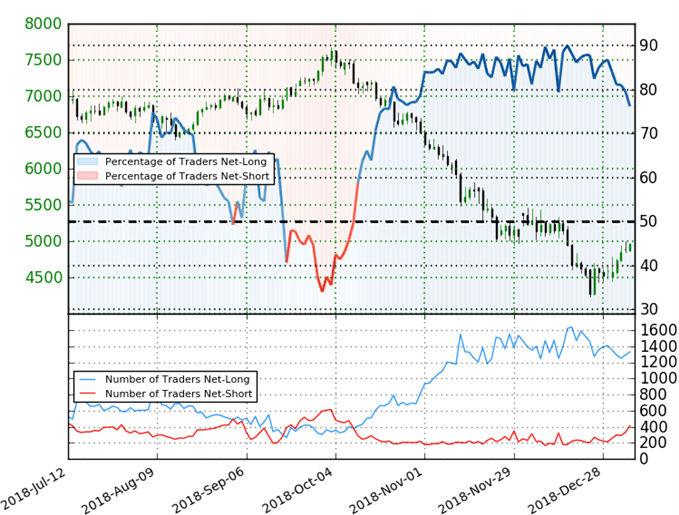