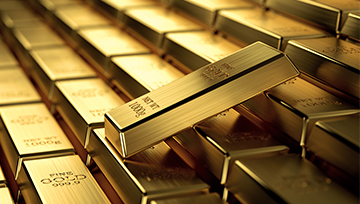 In this series we scale-back and take a look at the broader technical picture to gain a bit more perspective on where we are in trend. Here are the key levels that matter on the commodity bloc heading into the yearly close. Review this week’s Strategy Webinar for an in-depth breakdown of these setups and more. 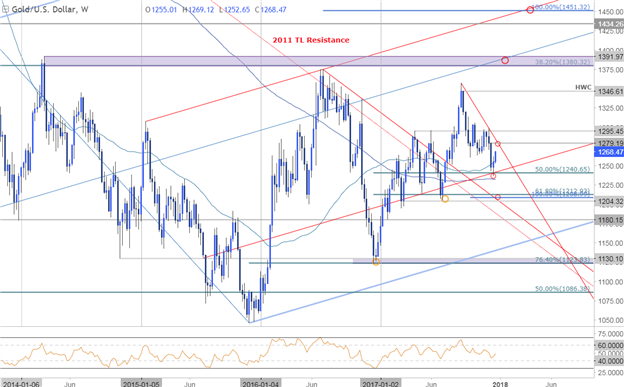 Notes: Gold prices rebounded off critical confluence support last week at 1240 with advance now eyeing initial resistance at the November high-week close / 2017 trendline resistance at ~1279. Heading into the open of 2018 trade, the focus remains weighted to the topside while above the December lows with broader bullish invalidation down at 1204/08. A breach higher from here still has to contend with the April swing highs at 1295.

Bottom line: We’ll be looking to fade weakness while above 1240 heading into the start of the year with a breach above 1295 needed to mark resumption of the broader uptrend in Gold prices. Such a scenario targets subsequent resistance objectives at the 2017 high-week close at 1349 backed by 1380/92. 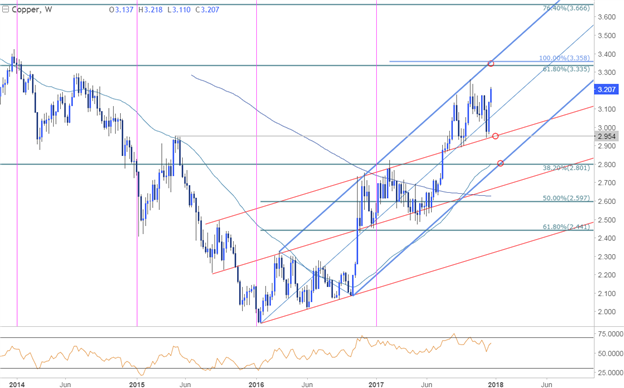 Notes: Copper prices have continued to trade within the confines of a well-defined ascending pitchfork formation extending off the 2016 lows. A breach above the 2017 yearly opening range in July fueled a rally into the upper median-line parallel which capped the advance back in October. A parallel extending off 2015 September high (red) has continued to offer near-term support with prices rebounding off this mark earlier this month. Note that continued bearish divergence highlights the risk of a near-term pullback here.

Bottom line: Heading into the yearly close I’ll be looking for a final exhaustion rally into the 3.33/36 before a larger correction. This zone is defined by the 100% extension of the 2016 rally & the 61.8% retracement of the 2011 decline and converges on the upper median-line parallel into the 2018 open. Interim support rests at 2.95 with broader bullish invalidation down at 2.80. 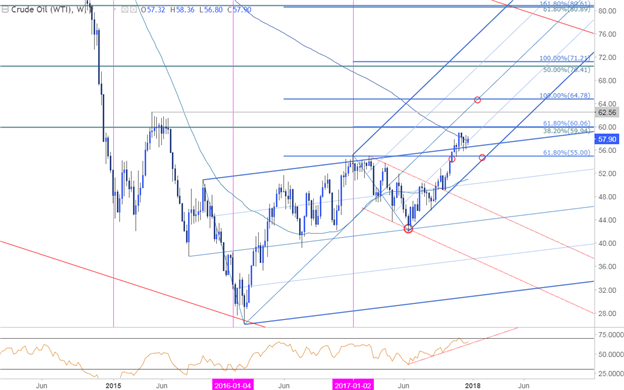 Notes: Crude prices have continued to consolidate just above the upper median-line parallel of the broader pitchfork we’ve been tracking since early 2016. The immediate focus is on a break of this consolidation range with the broader outlook weighted to the topside while within the embedded pitchfork extending off this year’s low. A breach eyes initial targets at the 59.94-60.06 Fibonacci confluence backed by the 2015 high at 62.56 and the 100% extension at 64.78.

Bottom line: we’ll favor a topside breach of this consolidation heading into 2018 while noting near-term support at 55 and broader bullish invalidation at the lower parallel / 52-week moving average at ~51.00/50. Review a breakdown of the near-term levels in my latest Crude Oil Scalp Report.