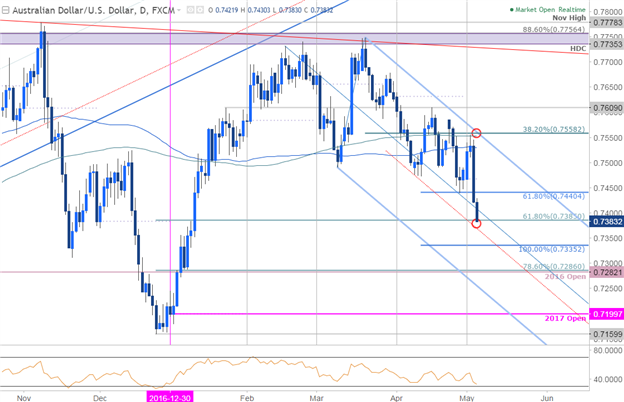 Technical Outlook:We highlighted this setup back on April 25th citing a downside bias on the Aussie sub-7611 ahead of Australian CPI. Fast-forward over a week (and RBA) and the pair is now approaching a key near-term support confluence at 7375/85 after rebounding off resistance early in the week. This level is defined by the 61.8% retracement of the December and is backed closely by a median-line parallel extending off the early-April lows.

Check out our AUDUSD 2Q projections in our Free DailyFX Trading Forecasts. 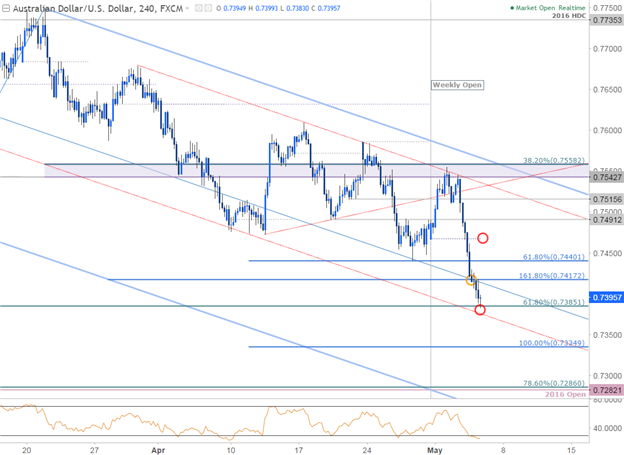 Notes: A closer look at near-term price action further highlights Monday’s reversal off key near-term confluence resistance at 7543/58 with the decline now testing support at 7375/85. The immediate decline is at risk while above this level but the broader outlook remains weighted to the downside while above the monthly/weekly open at 7467. Interim resistance now 7417 & 7440.

A break lower from here targets subsequent support objectives at 7335 & the 2016 open / 78.6% retracement at 7282/86. A third of the daily average true range (ATR) yields profit targets of 20-24 pips per scalp. Added caution is warranted heading into the U.S. Non-Farm Employment report tomorrow with the release likely to fuel increased volatility in the USD crosses. That said, from a trading standpoint I would be looking to fade strength while below the monthly open with a break below this support zone needed to mark resumption of the broader decline off the yearly highs. 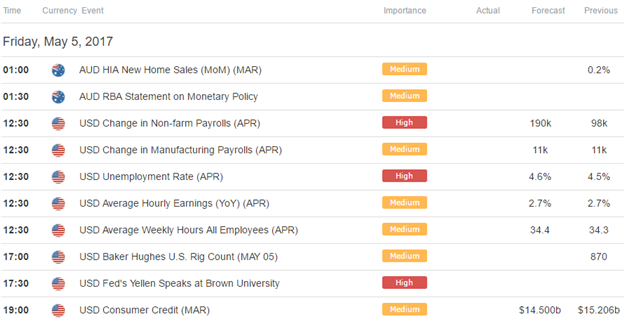