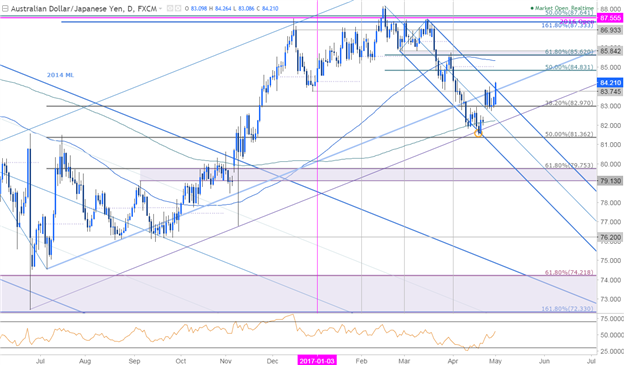 Technical Outlook:I highlighted this AUDJPY setup in my 2017 Top Trading Opportunity earlier this year and heading into the start of May trade the focus is on fate of last month’s rebound off long-term trendline support extending off the 2016 lows. The rally is pressing through near-term resistance at the upper median-line parallel with the yearly open just higher at 84.38.

The immediate advance is vulnerable heading into this region but the medium-term focus remains higher while above 82.97. Topside targets are eyed at 84.83 & 85.26- both regions of interest for possible near-term exhaustion / short-entries. 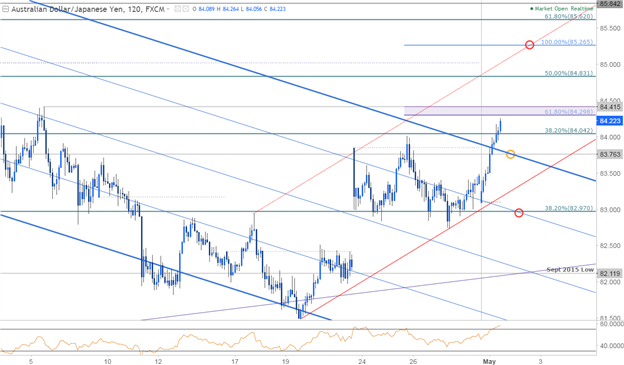 Notes: A closer look at near-term price action highlights the break of both last week’s range highs & the upper parallel with the rally now approaching resistance at 84.30/41- aside from the yearly open, this region is also defined by the 61.8% extension of the advance and the 4/5 swing high. Look for some possible kickback from there with interim support eyed at 83.76. From a trading standpoint, the immediate focus is on 83.76-84.41 range with our broader bullish invalidation at 82.97.

A quarter of the daily average true range (ATR) yields profit targets of 22-25pips per scalp. Although the RBA is widely expected to hold its current policy stance, added caution is warranted heading into the rate decision with a more dovish tone from Governor Lowe or commentary regarding valuation of the Aussie likely to fuel increased volatility in the crosses. Keep in mind Australia has kept interest rates at a record low of 1.5% since August and although inflation has continued to creep up to target, a soft labor market & falling commodity prices have limited the central bank’s willingness to act. 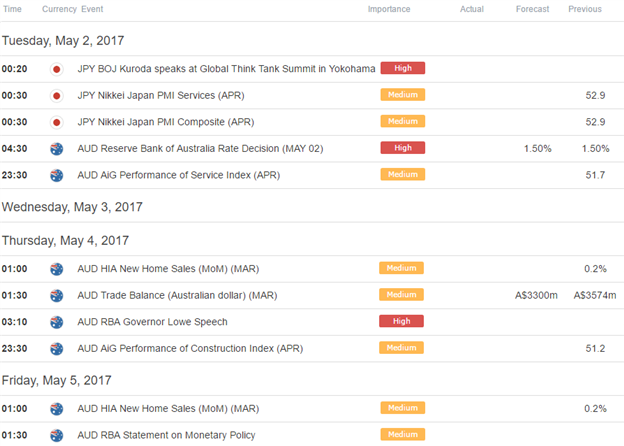