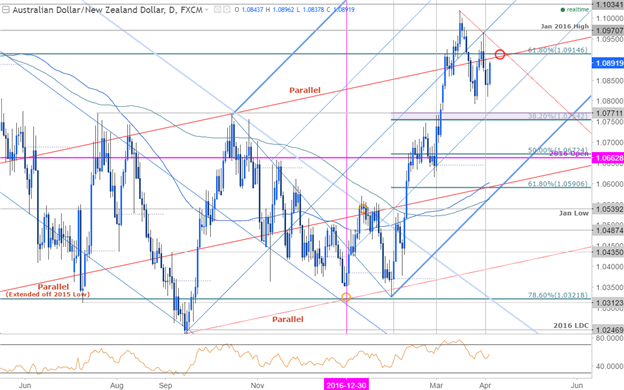 AUD/NZD Trapped- Rebound at Risk Below 1.09

Technical Outlook:AUDNZD is in consolidation near the yearly highs after rallying more than 6% off the January lows. The reversal ahead of the January 2016 highs at 1.0970 late-last month remains in focus with the near-term risk weighted to the downside while below confluence resistance around 1.0910/20.

Interim support rests with the 50-line backed closely by 1.0754/71– a region defined by the July / October highs and the 38.2% retracement of the yearly advance. A break below this zone would shift the broader focus lower with such a scenario targeting 1.0662/72 & critical support at 1.0590-1.06(broader bullish invalidation & an area of interest for exhaustion / long-entries). Keep in mind we’re treating this pullback as a correction with the longer-term outlook weighted to the topside while within this broader ascending pitchfork formation. 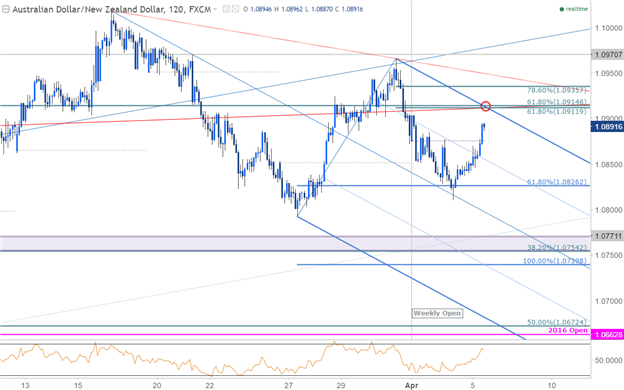 Notes:A closer look at price action highlights near-term resistance at the upper median-line parallel of this newly identified descending pitchfork formation extending off the highs. This level feature converges on the 61.8% retracement of the recent decline and the longer-term 61.8 of the 2016 trading range at 1.0912/16. Note that the weekly opening range high comes in just below at 1.0904 – look for a reaction here with a breach above basic trendline resistance off the early highs needed to mark resumption of the broader up-trend.

A tighter range here on AUDNZD has me looking for 1/3 of the daily average true range (ATR) which yields profit targets of 20-23pips per scalp. The economic docket is rather light this week from both respective counterparts, keeping the focus on a break of this initial weekly / monthly opening range.