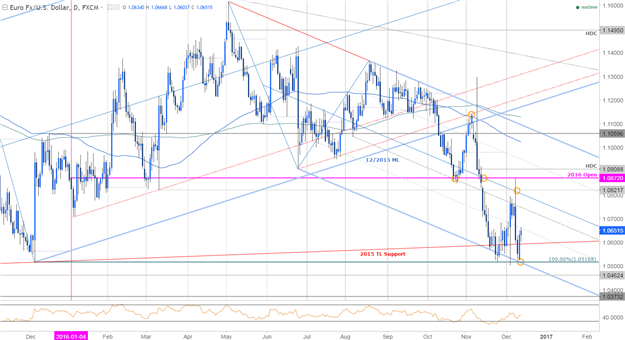 Technical Outlook: Back on December 7th we highlighted that, “Therebound off the lower median-line parallel of a modified pitchfork formation dating back to the yearly highs shifts the focus higher in EURUSD,” with the post-ECB sell-off making yet another defense of the December 2015 low at 1.0517. The pair posted an outside-day reversal off support to open the week with the subsequent rebound testing near-term resistance here at the 50-line. Although the immediate topside bias is at risk, the trade remains constructive while above the weekly opening-range low. 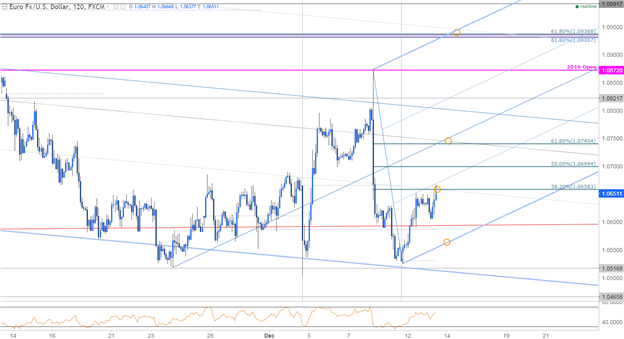 Notes: A close look at price action highlights a newly identified slope formation off the recent lows with the exchange rate stretching into near-term confluence resistance at 1.0658 early in NY trade. The risk is for a pullback from here but ultimately I would be looking fade weakness (buy a dip) into the lower parallel with interim support seen at the monthly open at 1.0587 & ~1.0565. A break below this mark invalidates the reversal play with such a scenario shifting the focus to subsequent support objectives at 1.0517 & 1.0466.

A topside breach targets the 1.07-handle & 1.0740- a rally surpassing this confluence resistance level would be needed to suggest a more meaningful rebound is underway. Keep in mind the FOMC is widely expected to hike interest rates by 25bps (already priced in) and the major focus will be on the future outlook for monetary policy heading into 2017. Also note we’ll be getting the updated assessment from the committee members with projections on growth, inflation, unemployment & the all-important interest rate dot plot. Follow the real-time news feed for live updates during the release. 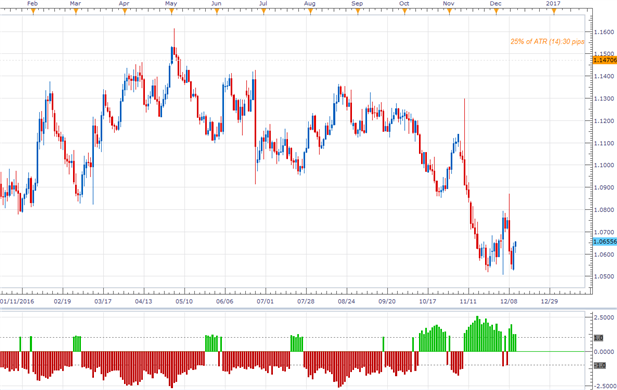 A summary of the DailyFX Speculative Sentiment Index (SSI) shows traders are long EUR/USD- the ratio stands at +1.31. While the current SSI profile remains bearish, it’s important to note that the pullback in long positioning from the November extreme of 2.55 has been accompanied by a broader turn in the exchange rate and a flip to net-short in the coming days could invalidate the near-term bearish outlook. That said, I’ll be looking for a continued build in short positioning to suggest a more significant low may be in place.