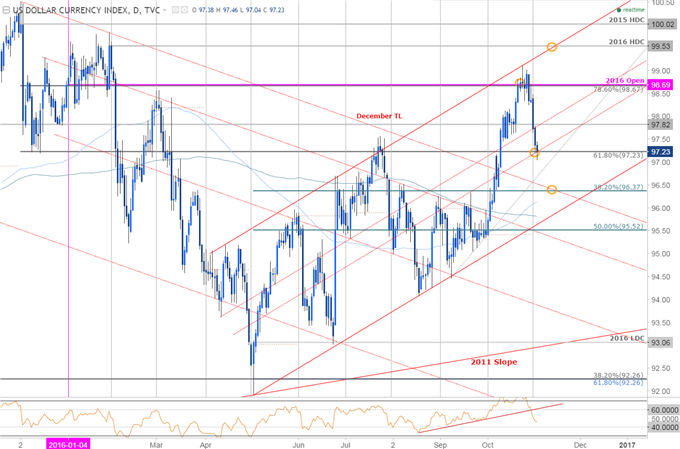 Technical Outlook: The DXY turned from up-slope resistance late-last month on building divergence after failing to hold above confluence resistance at 98.67/69 – a region defined by the 2016 open & the 78.6% retracement of the December decline. The broader risk remains weighted to the downside while below this threshold with the index testing a near-term support confluence at 97.23/26 ahead of tomorrow’s Non-Farm Payrolls report. 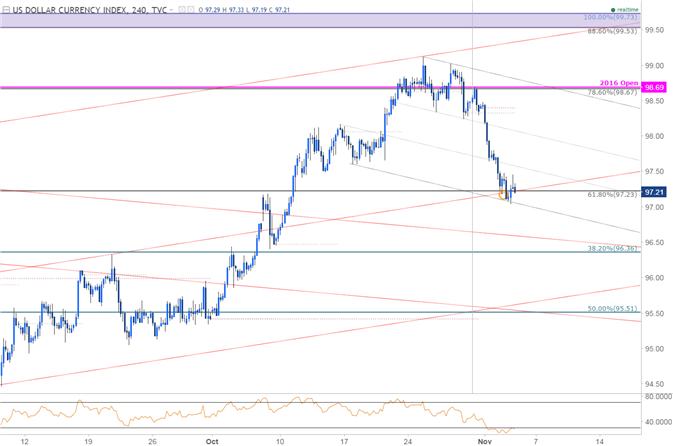 Notes: A closer look at near-term price action highlights some descending slope lines that have continued to offer some guidance on this decline. Look for initial resistance at these trendlines on a rebound and if the USD has put in a near-term top, we’ll want to see price stay below the weekly / monthly open at 98.28/39on a rebound tomorrow.

A break lower targets basic trendline support off the September lows (check daily) around 96.70 backed by the 38.2% retracement of the May advance at 96.36. Key support rests lower at 95.52/80 where the 50% retracement, channel support & the 200-day moving average converge.

October Non-Farm Payrolls are expected to have risen by 175K, up from a previous print of 156 with unemployment widely expected to downtick to 4.9%. We’ll also want to keep a close eye on the labor force participation rate which is expected to hold at 62.9% after an uptick last month. On the back of this week’s FOMC release, the average hourly earnings may be of particular interest as the committee looks for ‘further evidence’ that the central bank will be able to achieve the 2% inflation-target over the policy horizon.

From a trading standpoint, I would be looking to fade strength while below the monthly open with a break of near-term confluence support eyeing subsequent targets into the lower parallels. Note that we’ve been tracking a similar setup on the USDOLLAR which also broke back below its respective yearly open this week.