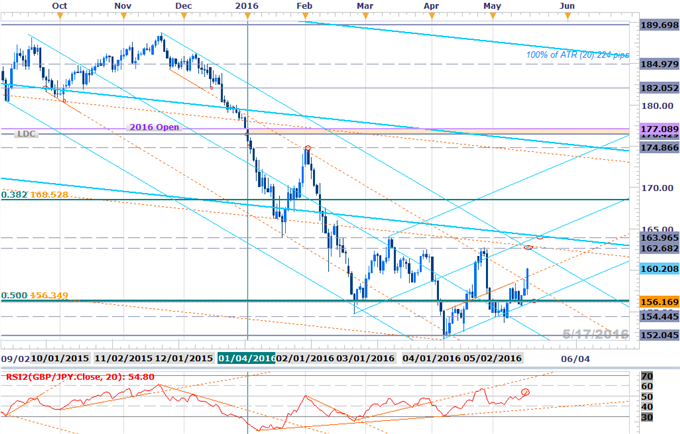 Technical Outlook: GBPJPY is attempting a breach above a sliding parallel extending off the late-November low with the broader focus weighted to the topside while above 1.5617/35. This region is defined by the 50% retracement of the advance off the 2011 low & the February low-day close. We’ve been following this trade on SB Trade Desk since rebound off the low median-line earlier this month with the advance through the monthly opening range approaching some near-term resistance targets that could offer a reprieve for the yen. Broader topside objectives are eyed at 162.68 & 163.96- both of which converge on longer-term median-lines and could provide more significant resistance. 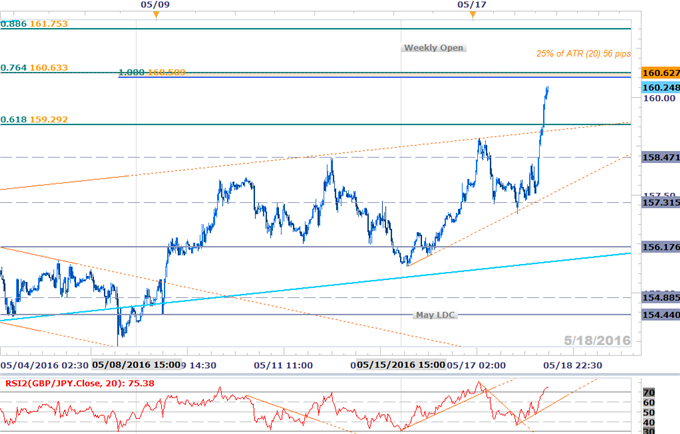 Notes: Last night’s rally in Asia constituted an objective break of the weekly opening range, keeping the topside bias in play. We closed out some long-exposure earlier today with the immediate advance at risk heading into confluence Fibonacci resistance into 160.59/63. Interim support rests at 159.29 backed by 158.47 with our near-term bullish invalidation level pegged at 157.31. A breach above this key resistance threshold eyes subsequent topside targets at 161.75 and the monthly high at 162.80. Continue tracking this setup and more throughout the week- Subscribe to SB Trade Desk and take advantage of the DailyFX New Subscriber Discount.

Keep in mind this is a wider range scalp with a quarter of the daily average true range (ATR) yielding profit targets of 54-58 pips per scalp. Added caution is warranted headng into UK Retail Sales data tomorrow with the release likely to fuel increased volatility in sterling crosses. Check out SSI to see how retail crowds are positioned as well as open interest heading into the close of the week.