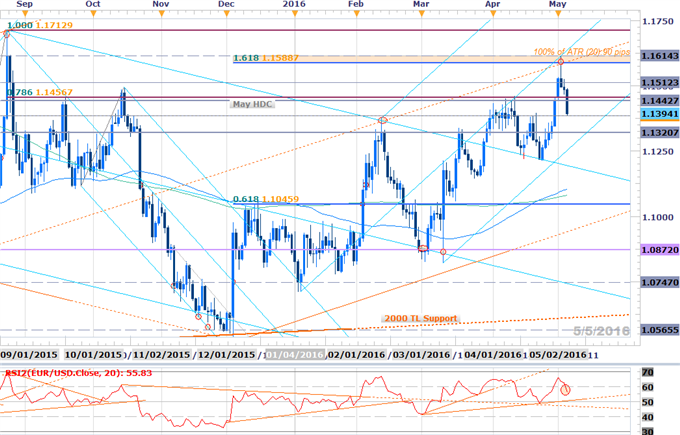 Technical Outlook: Euro reversed off a major resistance confluence early this week at 1.1589-1.1614. This level is defined by the 1.618% extension of the advance off the December low, the August high-day close, a pivot-line extending off the March 2015 low and a basic median-line extending off the 2016 low. The subsequent reversal is coming into near-term support ahead of tomorrow’s U.S. Non-Farm Employment report and a rebound could offer favorable entries for a push lower in the pair. 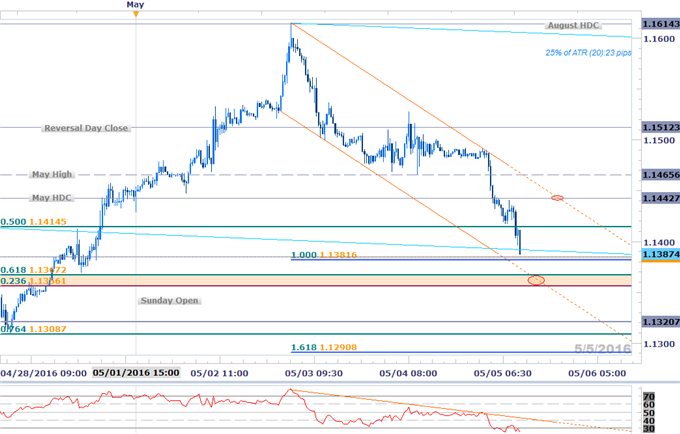 Notes: The pair is been tradaing wihtin the confines of a near-term descending channel formation off the highs with the decline appraching initial support at 1.1382/85 backed closely by more significant support at 1.1356/67. I would be expecting some kickback from one of these levels heading into the release with the immediate downside bias in-play while below the May high-day close at 1.1443.

A break lower eyes subsequent support objectives at 1.1309/20 backed by the the 1.618% extneison at 1.1291. Added caution is warranted heading into the NFP release with the event likely to fuel increased volatility in the USD crosses. A quarter of the daily average true range (ATR) yields profit targets of 21-25 pips per scalp. Continue tracking this setup and more throughout the week- Subscribe to SB Trade Desk and take advantage of the DailyFX New Subscriber Discount!