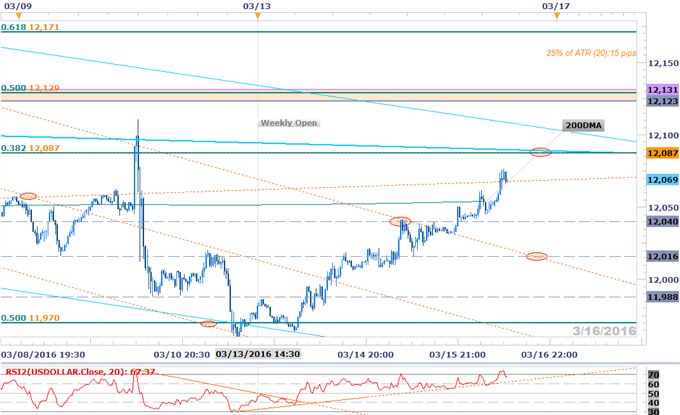 Technical Outlook: We’re just hours ahead of today’s FOMC interest rate decision and the Dow Jones FXCM U.S. Dollar Index is trading just below key near-term confluence resistance at 12087. This level is defined by a basic 38.2% retracement of the February decline and the median-line extending off the December high and is backed closely by the upper median-line parallel of an embedded pitchfork off the January 21st high. We will be looking for strong resistance & possible short-entries up there with key resistance & bearish invalidation steady at the 12123/31 where the 2016 open converges on the April high-day close & the 50% retracement. A breach above this region keeps the immediate long bias in play targeting the 61.8% retracement at 12171.

Look for soft support at the 200-day moving average at 12054 with a break back below former channel resistance / 12016 validating a near-term reversal targeting 11988 & key support at 11970. Continue tracking this setup and more throughout the week- Subscribe to SB Trade Desk and take advantage of the DailyFX New Subscriber Discount! 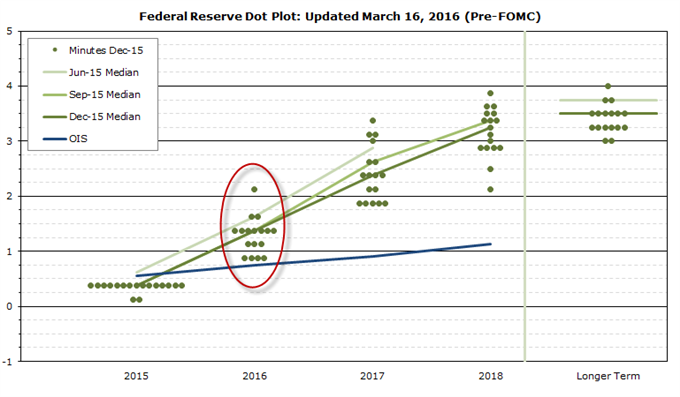 Keep in mind market participants will be closely eyeing alterations to the committee’s projections on interest rates moving forward. Above are the latest projections from the December rate decision when the central bank moved to lift interest rates for the first time in nearly a decade. The median path of expected rates - known as the glide path, as indicated by the green lines in the chart above - has consistently flattened over the past three meetings. In other words, Fed officials are lowering expectations for how high interest rates will rise in the long-run. What will we be looking for today?- to see what the adjustment is to the new Mar-16 glide path. The Fed has suggested it will raise rates three to four times this year, while markets are only pricing in one to two hikes. Someone is wrong, and this divergence in beliefs will be addressed today - and force a volatile reaction in USD-pairs as a result.

Check out SSI to see how retail crowds are positioned as well as open interest heading today’s rate decision. 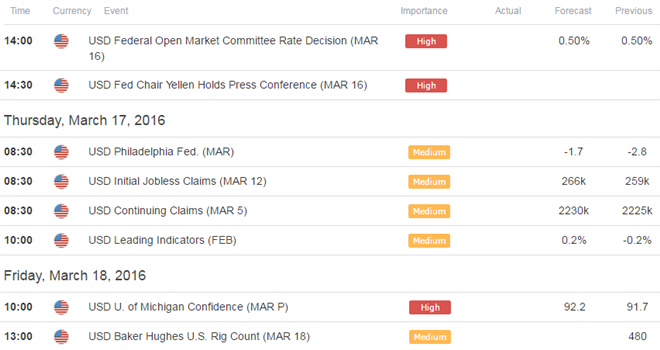