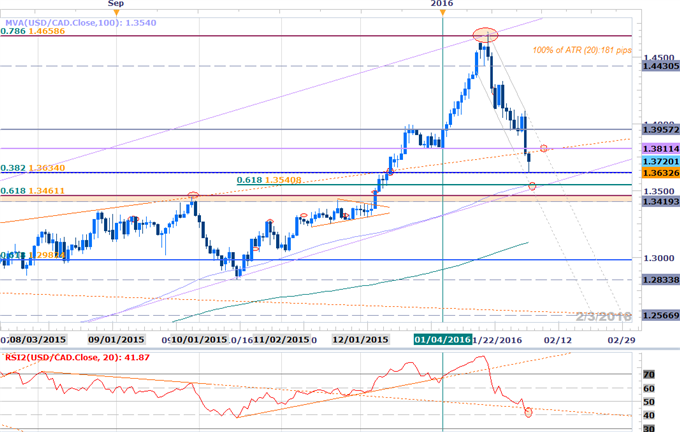 Technical Outlook: The USDCAD has been trading within the confines of a broad ascending channel formation off dating back to 2015 with the reversal off confluence resistance at 1.4659 last month shifting the focus lower in pair. The breakdown is now coming into some key support zones as momentum approaches the 40-support threshold. The near-term focus remains weighted to the short-side while below the 2015 high-day close at 1.3957.

Today’s low was just pips off the 38.2% retracement at 1.3634 with more significant support (area of interest for long-entry) seen at 1.3540. This level is defined by the confluence of the 100-day moving average, the 61.8% retracement of October advance & basic slope support extending off the May low. Broader bullish invalidation rests at 1.3420/60. 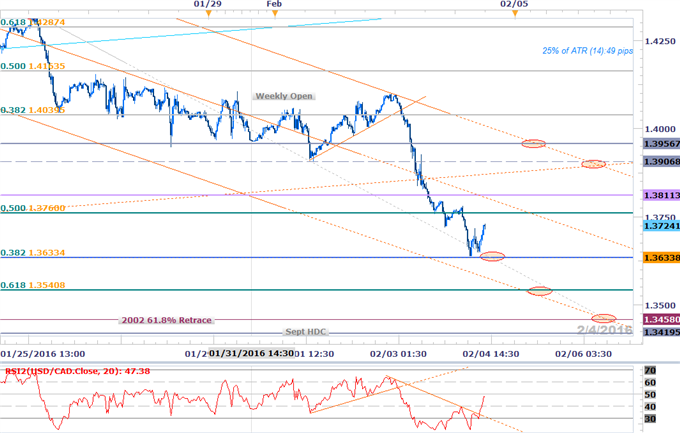 Notes:The loonie has been trading within the confines of a descending channel off the January highs with a break below the weekly-opening range low keeping the short-bias in play while within this formation. Interim resistance stands at 1.3760, backed by the 2016 open at 1.3811 & 1.3906. As noted earlier, key near-term resistance & bearish invalidation stands with the 2015 high-dayclose / channel resistance at 1.3956.

Bottom line- the immediate short bias is at risk heading into 1.3540 / channel support with a reversal off that region targeting the aforementioned objectives into slope resistance. Ultimately we would be looking to sell that rally into a new low with a break below critical support at 1.3420/60 risking substantial losses for the greenback. A quarter of the daily average true range (ATR) yields profit targets of 48-50pips per scalp. Use caution heading key event risk tomorrow with employment data out of Canada & the U.S. Non-Farm Payroll report likely to fuel added volatility in USD & CAD crosses.

Continue to track this setup and more throughout the week, subscribe to SB Trade Desk and take advantage of the DailyFX New Subscriber Discount!

Check out SSI to see how retail crowds are positioned as well as open interest heading into Jobs Friday. 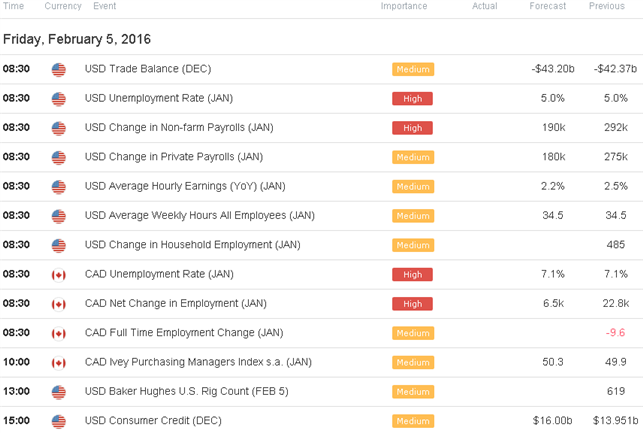