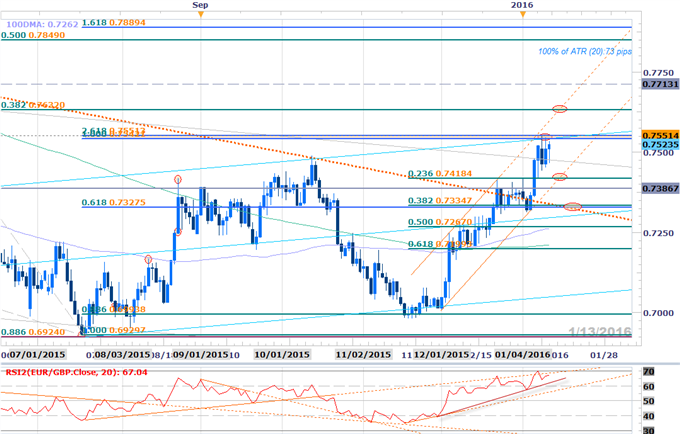 Technical Outlook: EURGBP broke above trendline resistance extending off the August 2013 high last month, with the advance now coming into a critical resistance confluence at 7542/51. This region is defined by the 2.618% extension, the broader 100% extension and the upper median-line parallel extending off the June 2015 high. The immediate topside bias is at risk below this mark with near-term support eyed at 7418 backed by 7375/86 & 7328/35 (bullish invalidation).

A breach of the highs targets subsequent objectives at 7617/32, 7713 & 7849. Note that momentum has failed at 70 with multiple support triggers pending. Bottom line- the pair is at uptrend resistance & a pullback off these levels would likely offer favorable long-entries lower down. 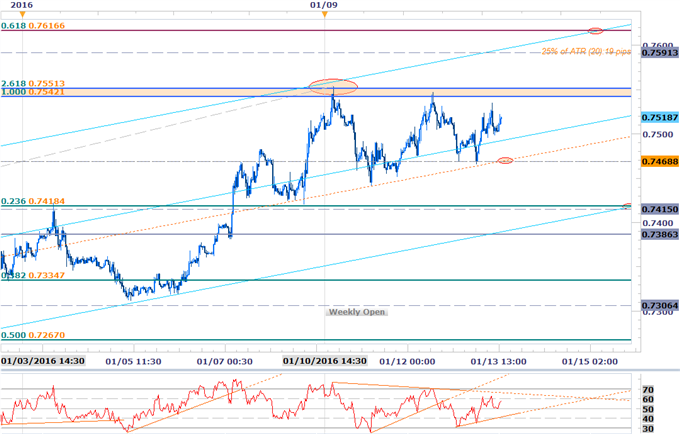 Notes:EURGBP has been trading within the confines of a well-defined ascending median line formation extending off the November lows with the pair now in consolidation just below key near-term resistance at 7542/51. Look for a break of this consolidation range with a break below the sliding parallel (red) / today’s lows shifting the focus towards interim support & our near-term bullish invalidation level at the lower median-line parallel / 7418. A break below this region suggests a larger scale correction may be underway with such a scenario targeting subsequent support objectives into 7328/35.

A topside breach keeps the long-bias in play with initial resistance targets eyed at 7591, 7617 & 7715/13. A quarter of the daily ATR yields profit targets of just 18-20pips per scalp so we’ll want to time our entries with a little more precision here. Added caution is warranted heading into the Bank of England Interest Rate Decision tomorrow morning with the release likely to fuel volatility in the sterling crosses.