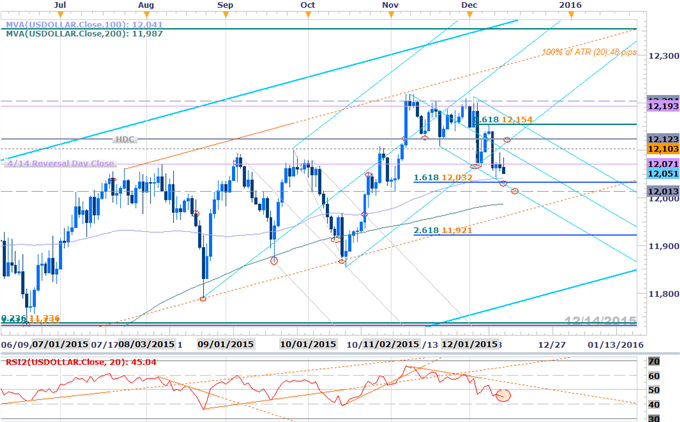 Webinar: All Eyes on FOMC- US Dollar Hangs in the Balance

Notes:The Dow Jones FXCM U.S. Dollar Index (Ticker: USDOLLAR) has been trading within the confines of a descending pitchfork formation off the November highs. The focus remains weighted to the downside while below the median-line with initial support seen at 12041 (100DMA) backed by a more significant confluence at 12032 where the 100% extension converges on the lower median-line parallel. Subsequent support targets eyed at the November low at 12013 & the 200DMA at 11987.

Initial resistance stands at 12106/11 with a breach above the April high-day close at 12123 needed to shift the focus back to the topside. Note that consensus estimates are calling for a 25basis point hike on Wednesday- the first hike since June 2006. With Fed Futures now showing a 74% probability of a rate hike, the risk is if the central bank does NOT move. Keep in mind that we will also be getting the updated quarterly projections from the committee as it pertains to growth, inflation & interest rates. As we approach the holidays and thus illiquid markets, it’s worth reviewing principles that help protect your capital. We call these principles the "Traits of Successful Traders.” 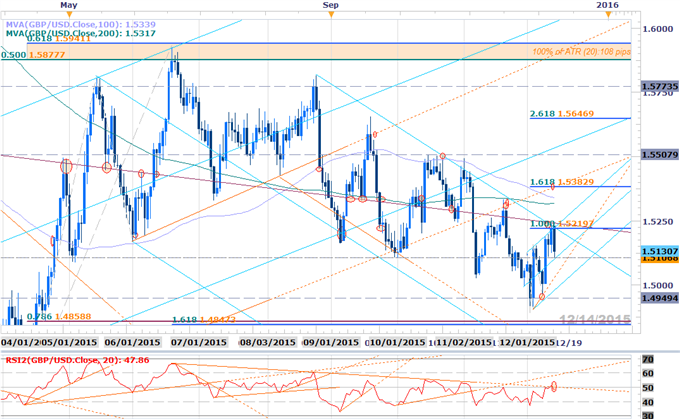 Notes:The pound is coming off significant confluence resistance at 1.5219/40 with today’s pullback finding support at the median-line off the November low / October lows just above the 1.51-handle. This key range that will be in focus heading into tomorrow’s UK Consumer Price Index (CPI) release- look for sterling strength to persist on a strong number.

The trade remains constructive while above the medina-line with a breach of the highs targets subsequent resistance objectives at 1.5317, 1.5340 & the 1.618% extension at 1.5383. A break below the median-line shifts the focus lower towards the lower median-line parallel ~1.50.

For updates on this setup and more throughout the week, subscribe to SB Trade Desk and take advantage of the DailyFX Subscriber Discount on your first month! 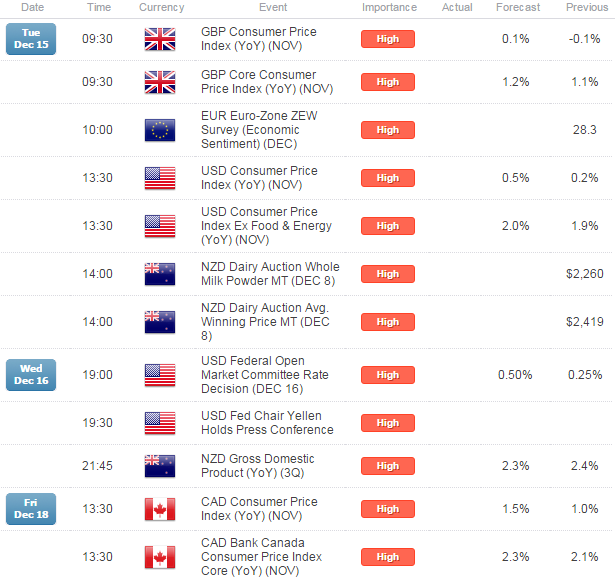