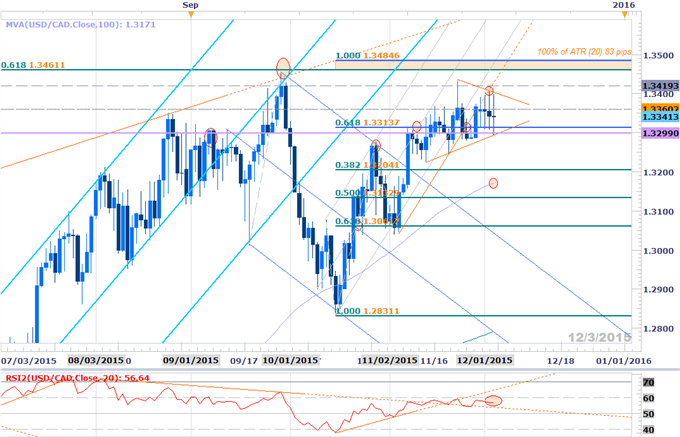 USDCAD has continued to consolidate within the confines of a triangle formation with the weekly opening range taking shape above support at 1.3300/13 ahead of key event risk tomorrow. Note that the daily momentum signature has continued to hold sub-60, suggesting that the pair remains at risk for further losses. 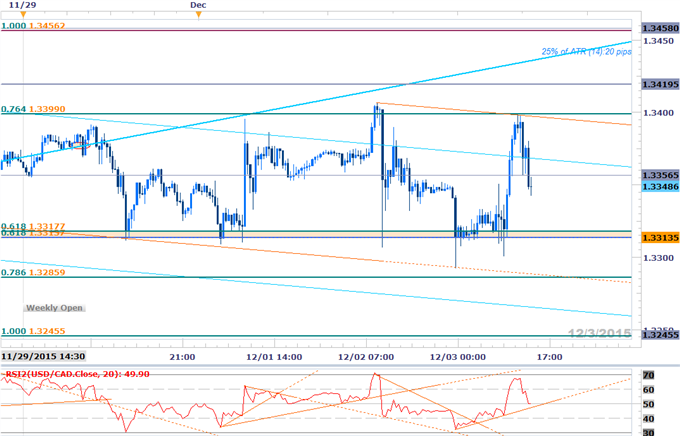 Notes: The intraday chart shows the pair trading within the confines of a proposed descending pitchfork formation with a sliding parallel off yesterday’s high catching today’s rally almost to the pip. Bottom line: look for a break of the weekly opening range (1.33-1.34) on tomorrow’s release with short’s favored below the 1.34-handle. A downside break targets support objectives at 1.3286, 1.3246 & 1.3234/44.

A quarter of the daily average true range (ATR) yields profit targets of just 19-22pips per scalp, but expect this range to widen as we head into significant event risk tomorrow with the release of US & Canada employment figures likely to fuel added volatility in USD & CAD crosses. Consensus estimates are calling Canadian economy to shed some 10K jobs with the unemployment rate expected to hold at 7%. More emphasis will be placed on the US Non-Farm Payrolls report as we quickly approach the December 16th FOMC meeting when the central bank is expected to raise the benchmark interest rate for the first time in nearly a decade. Estimates are calling for a print of 200K jobs with unemployment holding steady at 5%.