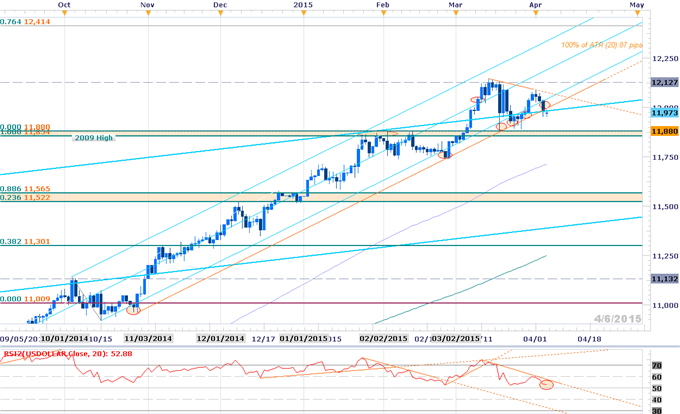 Notes: The NFP inspired sell-off in greenback last Friday amid thin holiday trade conditions has us looking to validate the break of the slope support range we’ve been targeting the last few months. Today’s close will be crucial with a hold below Friday’s close at 11,978 keeping the short-side of the USD in focus. A breach through the lower median-line parallel (blue) would be needed to put the topside back in play with such a scenario targeting basic TL resistance extending off the March high (~12,070). A resistance hold here targets key support at the 11,854/80 barrier which is defined by the 2009 high, the FOMC swing low and the January/February stretch highs. A move below this region puts the dollar at risk for a larger scale correction heading into March trade. Keep in mind we’ll be looking for full market participation to return heading into Asia tonight with April opening ranges in focus. It’s a rather light week for event risk with the release of the minutes from the March 17-18 FOMC policy decision on Thursday highlighting the economic docket. 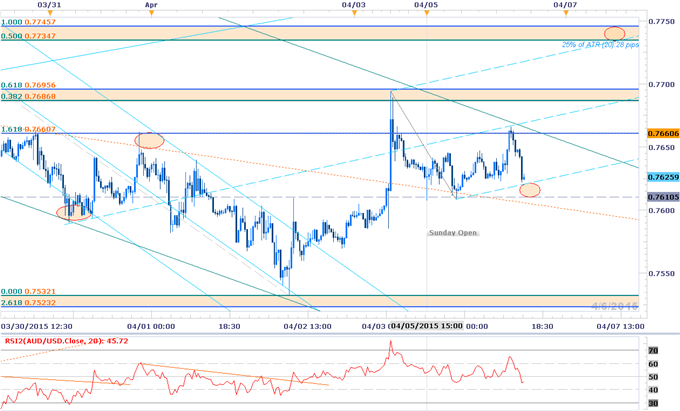 Notes:The RBA interest rate decision is on tap with the AUDUSD in focus to start the week. Although consensus estimates are calling for the central bank to hold the benchmark rate at 2.25%, market participants are pricing in a 75% probability for a 25basis point cut according to Credit Suisse overnight index swaps.

Heading into the release the Aussie is eyeing resistance at the upper MLP of a descending pitchfork off the March high (this region has now been reinforced by the US session high ~7660). A breach eyes our near-term bearish-invalidation level at 7689-96 with subsequent resistance seen at the 7734/45 Fibonacci confluence zone. Note a proposed ML formation (dashed) may be in play here with a break below the weekly opening range low at 7610 putting the short-side back into focus targeting the 7523/32 support range. 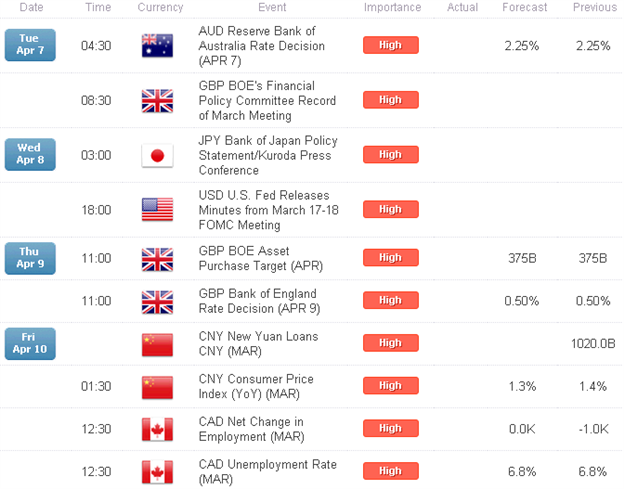