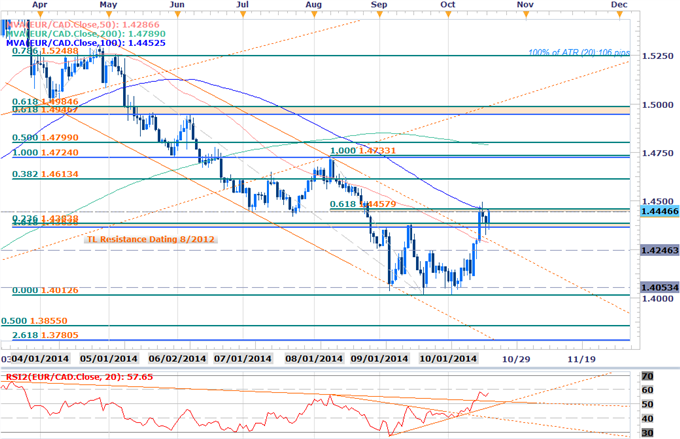 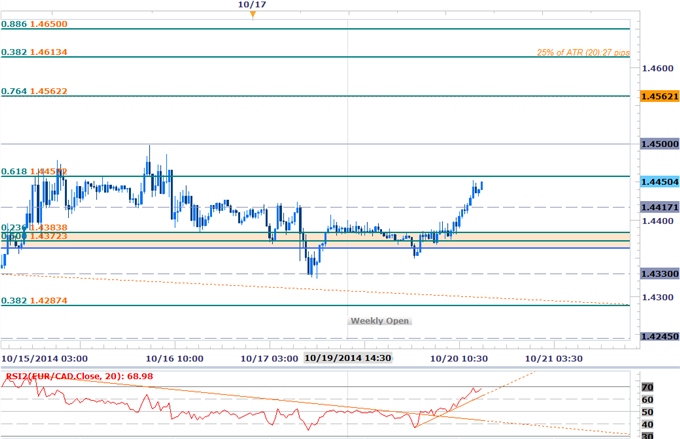 Notes: On October 1st we noted that the EURCAD was coming into key support at the 1.4053 support level with our topside bias in-play while above that key region. The pair subsequently rallied through the September opening range before finding resistance at our final topside objective at 1.4444 last week. The focus remains on this key resistance range which we will now extend into 1.4457 to respect the 61.8% retracement of the August decline. A breach of this region is needed to maintain our topside scalp bias with such a scenario eyeing subsequent resistance objectives and completing what looks to be a five wave advance off the monthly low.

Bottom line: we’ll favor buying dips while above Friday’s low (1.4425/30) with a breach through o1.4444/58 (close basis) offering further validation for our near-term directional bias. Caution is warranted ahead of the Bank of Canada interest rate decision on Wednesday with the event likely to fuel added volatility in CAD crosses. Follow the progress of trade setups like these and more throughout the trading week with DailyFX on Demand.

Join Michael for Live Scalping Webinars on Mondays on DailyFX and Tuesday – Thursdays on DailyFX Plus (Exclusive of Live Clients) at 12:30 GMT (8:30ET)