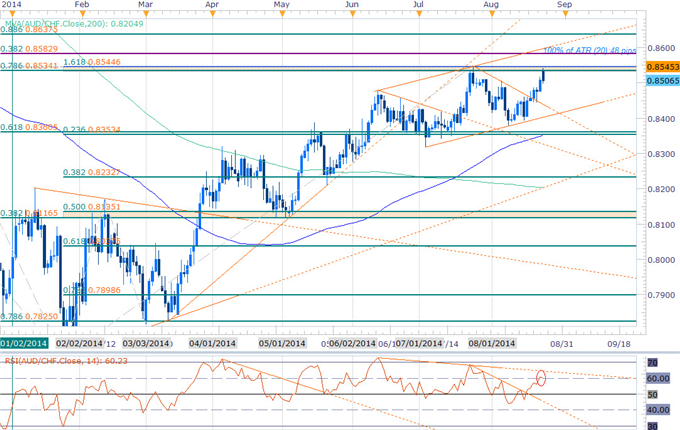 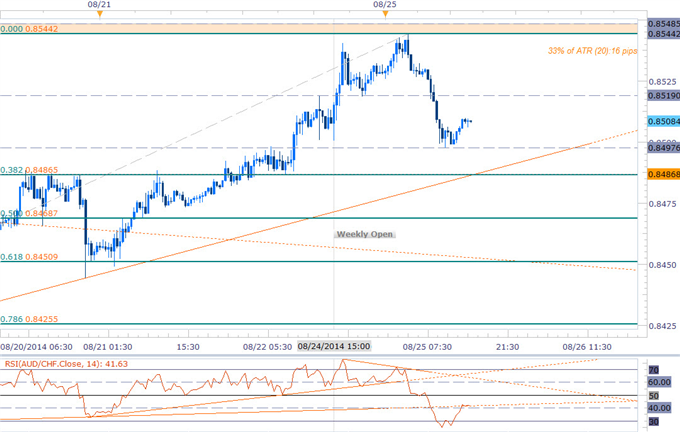 Notes: Divergence along the highs on the intra-week chart above followed by two support-trigger breaks in momentum warns of a possible turnover in the AUDCHF as we test the yearly highs / key resistance at 8544/48. That said, the pair has now filled the Sunday-open gap and we’ll look to play the break of this range with a move below trendline support eyeing subsequent support targets.

Bottom line: the broader topside bias can only be invalidated with a break sub 8353/60: that said, near-term the pair remains at risk for a pullback while below 8545 and we’ll look for a break of the weekly opening range / Sunday gap-fill for validation of our immediate scalp bias. Ultimately, if such a pullback does materialize, it may offer more favorable long entries closer to the 84-handle. Look for the breach above 8545 to put the longs back in play with a break of the daily RSI resistance trigger offering further conviction on long-side exposure.

Note that the average true range has remained rather tight here so we’ll increase the profit targets to 1/3 of the daily ATR- this puts us at approximately 16pips per scalp. There is limited event risk out of Australia and Switzerland heading into the close of August trade and as such we’ll look for broader market sentiment to drive volatility. Follow the progress of this trade setup and more throughout the trading week with DailyFX on Demand.

Join Michael for Live Scalping Webinars this week Tuesday – Thursday on DailyFX Plus (Exclusive of Live Clients) at 15:30 GMT (11:30ET)