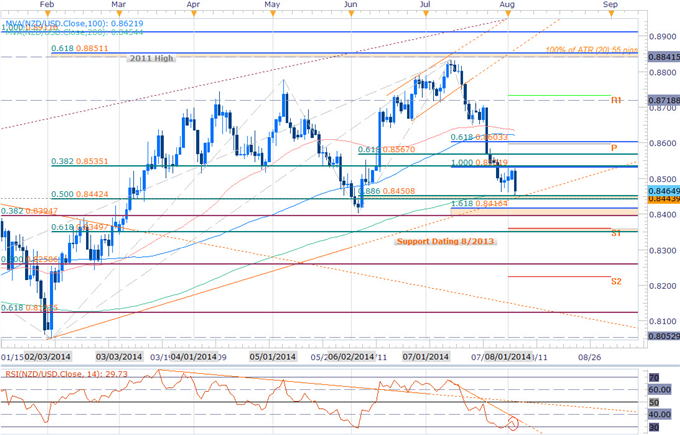 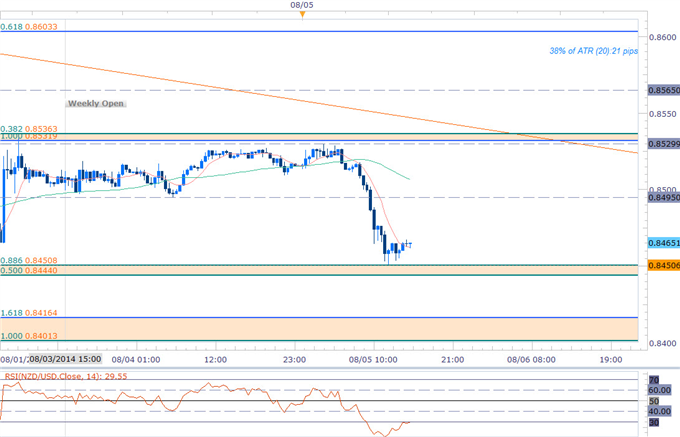 Notes: Back on July 14th we warned of possible exhaustion on the long-side of NZDUSD as the pair approached the 2011 highs around 8840. The subsequent turnover went well beyond all our support objectives and the kiwi now finds itself approaching key support to open August trade. The 8440/50 region is defined by multiple Fibonacci relationships as well as the 200-day moving average and will converge on trendline support dating back to the August 2013 low for the next few days. With the daily momentum signature holding the June lows the risk for a reversal higher builds while above this threshold.

Bottom line: looking for signs of exhaustion with a preference to buy dips near-term while above 8440. A break below this level puts us neutral with a move surpassing 8400 keeping the medium-term focus weighted to the downside heading into August trade. Look for a move surpassing the weekly opening range high / key resistanceat 8532/36 to add conviction on long-side exposure with such a scenario suggesting a more significant low may have been put in this week.

The average true range has remained rather tight here so we’ll up the profit targets to 38.2% of the daily ATR- this puts us at about 21pips per scalp. Note that caution is warranted heading into tonight’s data with the event likely to fuel added volatility on kiwi crosses. Follow the progress of this trade setup and more throughout the trading week with DailyFX on Demand.

Join Michael for Live Scalping Webinars this week Tuesday – Thursday on DailyFX Plus (Exclusive of Live Clients) at 15:30 GMT (11:30ET)