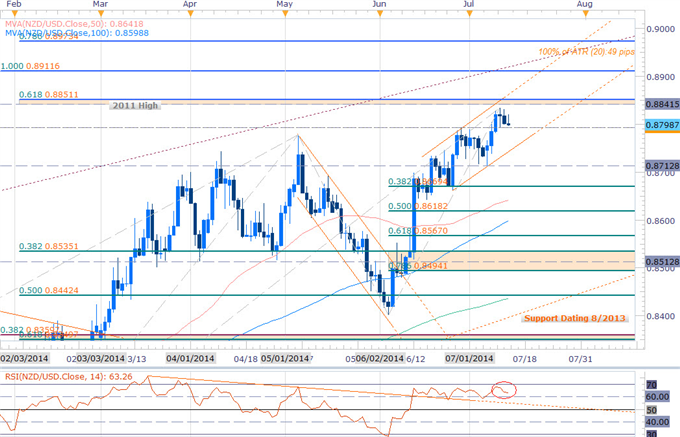 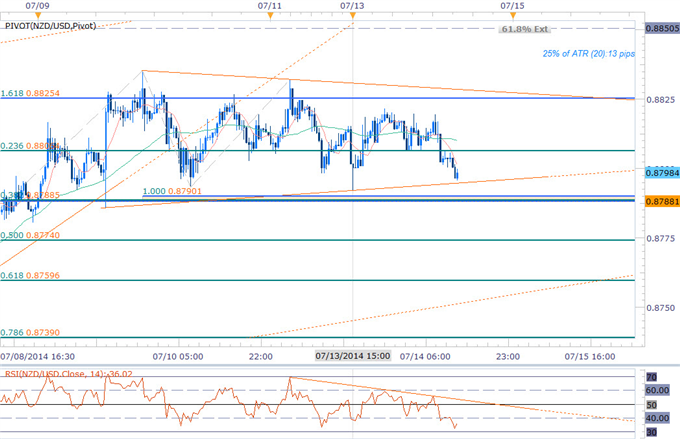 Notes: Last month we highlighted the break-out potential in NZDUSD with a decisive and deliberate breach above the monthly opening range highs confirming our topside bias into the close of June trade. The pair has since taken out all our resistance objectives before failing just ahead of the record all-time highs set back in 2011 at 8841.

The focus now falls on the weekly opening range as we hold just below this key resistance threshold with the pair continuing to trade into the apex of a consolidation pattern off last week’s highs. While these triangle formations will often be continuation patterns, we’ll remain nimble on a breach scenario and a run on that record high may be on the cards before turning over.

Bottom line: although the broader bias remains weighted to the topside, near-term the pair remains vulnerable below key resistance at 8841/51 and we’ll look to play the breakout of this consolidation pattern. A break below near-term support at 8790 shifts the focus lower heading into the close of the week with objectives eyed at channel support and the monthly range low at 8712. We will reserve this as our medium-term bullish invalidation with a break below suggesting a more significant high may have been put in last week. A breach/close above the July high keeps the topside bias in play with targets eyeing fresh record highs around 8911 and 8973.

Keep in mind the daily ATR is rather tight here and as such we’ll remain nimble ahead of the weekly range break / major event risk. Follow the progress of this trade setup and more throughout the trading week with DailyFX on Demand.