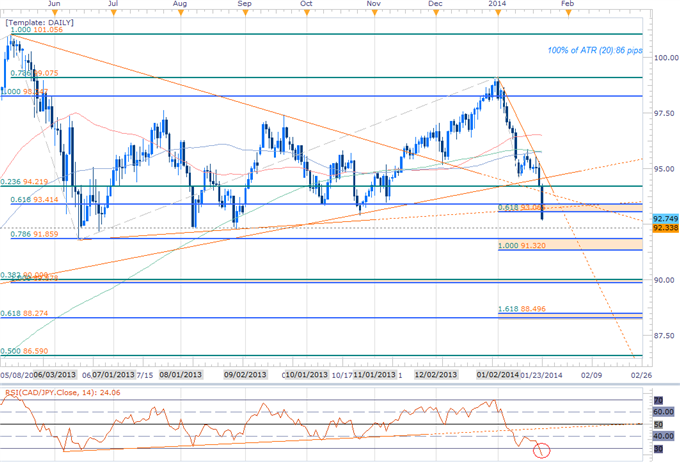 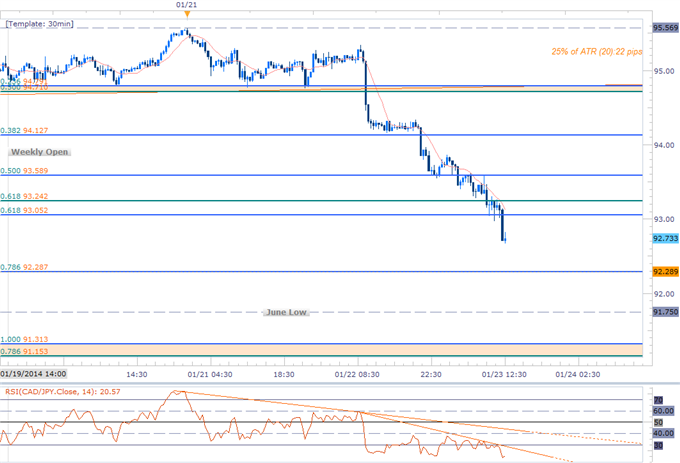 Notes: The CADJPY has broken some key support targets this week and the technical damage done keeps our focus weighted to the downside. It’s been a tough month for the pair with a decline of more than 6.7% since the start of 2014 trade and while some indicators may look quite stretched here it’s important to note that in strong directional trends momentum gauges can remain so for some time. Note that a few topside triggers are pending on the 30min which would take us out of short exposure and offer more favorable entries.

A key topside break in the USDCAD and a more dovish tone from the BoC continue to support further CAD weakness. Meanwhile the BOJ has continued to sound more upbeat with Governor Kuroda noting that the 2% inflation target might be attainable by late 2014. Lending further validation is massive outside day in the USDJPY today which has taken out the weekly opening range high & low in one swift move. The combination of loonie weakness and near-term yen strength remains the play here- but be warned: the snap-back on these can be radical.

Near-term focus remains on the short-side while below the 93.41/58 resistance region. This range is defined by the 61.8% extension from the decline off the 2013 high, the November low and former trendline support dating back to June. Look for a reaction in the 91.30/85 region where more significant support is eyed. Keep in mind that all the downside targets highlighted here are major technical thresholds, each of which could produce a more meaningful recovery.

Bottom line: We’ll look to sell rallies/breaks of support with only a breach above 93.41/58 shifting our immediate bias to neutral. Such a scenario looks for short conviction around the weekly opening range low at 94.71/79. On a larger scale the pair is now testing support of a broader range carved out since the May 2013 highs with each subsequent support break building the case for our medium-term outlook. Follow the progress of this trade setup and more throughout the trading week in DailyFX on Demand.

Join Michael for a Live Scalping Webinar next week Monday-Thursday morning on DailyFX Plus (Exclusive of Live Clients) at 1630GMT (11:30ET)