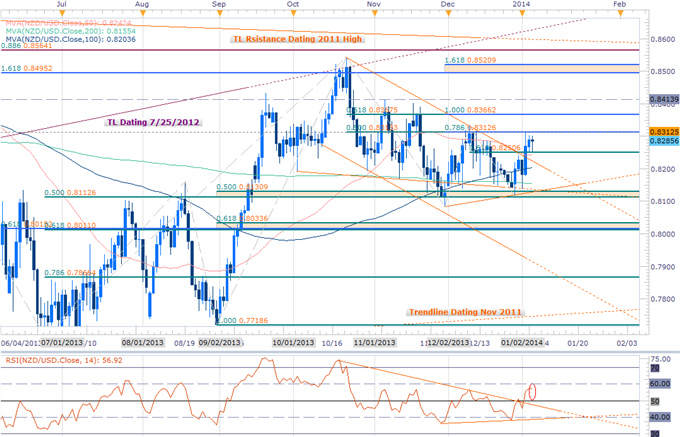 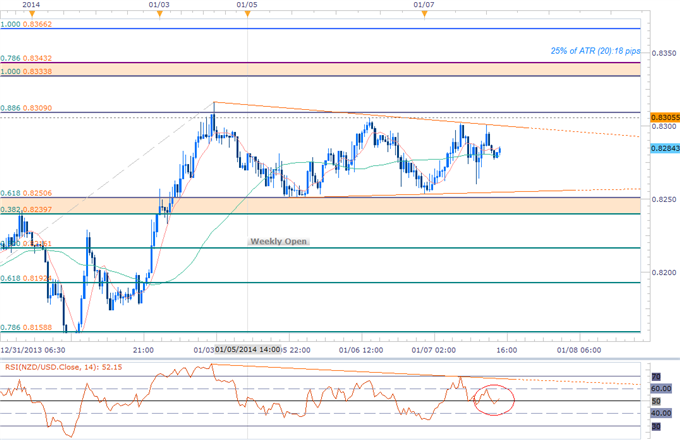 Notes: The kiwi has continued to hold within the confines of a well-defined weekly opening range and we await a break of said range to offer conviction on a near-term directional bias. The setup is similar to the AUDUSD setup featured yesterday in that the pair has reached near-term resistance and now has a clean weekly opening range break to validate the bias. The aussie broke to the downside last night and short scalps have been in play into break target 2 at 8890. Does an inside day today suggest a similar play here in the kiwi?

The 8310/13 region is of great interest as it now represents the weekly/monthly opening range highs as well as the confluence of the 50% retracement of the decline off the October high and the 78.6% extension of the ascent off the November low. As we head into major event risk later this week we will be looking for a reaction off this mark with a topside breach targeting a more critical resistance objective at 8366/67.

A break sub 8240 shifts our near-term bias to the downside against the opening range high heading into the close of the week. Only a break/close below key support at 8112/30 invalidates further topside strength with such a scenario putting the broader decline off the October high back into focus. Bottom line: the pair has broadly held within a well-defined range over the last few months we will continued to trade it as such until a breakout is validated. That said, look for the break of the weekly opening range to put this setup into play with caution warranted heading into NFPs as USD crosses are likely to see increased volatility. We’ll continue to follow this setup closely in DailyFX on Demand.